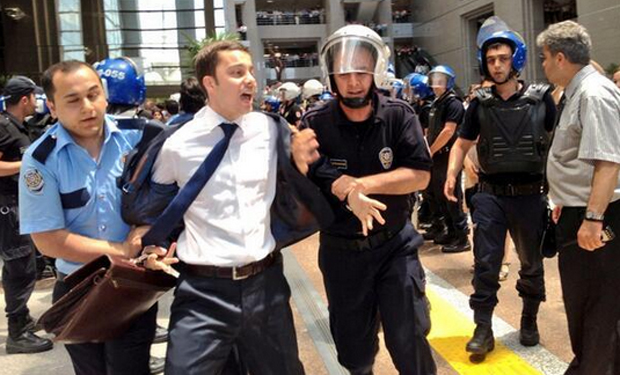 While the July 15 coup attempt was still continuing, thousands of judges and prosecutors were detained and then arrested over the lists prepared in advance under the pretex of coup attempt only 5 hours after the attempt started. Not only 4560 judges and prosecutors dismissed in a way of no need to take their defences but also their families were punished in advance. In fact, they were left to death thereby they were forced to evacuate the lojmans they had been residing; their all assets were seized and bank accounts were blocked; they were not employed and even prevented from making a newly life for themselves in abroad in a way of revoking their passports and putting a ban on leaving the country.

At the end of intervening 20 months of pre-trial detention period, some of the judges and prosecutors have been tried and convicted by ruling for the continuation of their arrest or release on the condition that they will pay for the rest of the imprisonment in case of the approval of the conviction by the appeal court.

The judges/prosecutors and the academics of law faculties dismissed and arrested under the emergency decree laws have brought up against a new shock when they are released which is that they are hindered from conducting any business or availing of freedom of labour so that they have been left to hunger or death.

For instance, Murat Özkan, serving his post of judge for 27 years successfully, applied to Istanbul Bar Association to be admitted the profession of lawyer after he was dismissed from the profession in a way of not granting the rigth to defense. The Bar rejected his application in January 10, 2017 on the grounds that the application was made under the state of emergency so it was impossible to accept it in this process. In this way, Istanbul Bar Association, one of the biggest Bar of the Europe, accepted the emergency unlawfulnesses as legal with its aforementioned decision (1).

Likewise, Dr. Yiğiter, dismissed from his post of academic at Ankara University Law Faculty under emergency decree law, applied to Ankara Bar Association for the law internship. The governing board of the Bar rejected his application on the same grounds mentioned above. In his statement, Yiğiter told that “The governing body of the Bar has turned into illegal apparatus of the state of emergency. They have become an assister of the business that’s made us a civil dead “(2).

The article 15/2 of theTurkish Constitution, still in effect, protects the rights and the freedoms which are immune even under the emergency circumstances. Despite this article, these rights of the lawyers which are granted to them by the Attorneyship Law and the Constitution have been disentitled under the pretex of emergency decrees.

After the excessive objections lodged against the rejections of the Bars as to the requests for the attorneyship license, the Turkish Bar Association, keeping its silence against the emergency unlawfulnesses holding on for 20 months and even making press releases supporting Erdogan government, was forced to accept these objections. Then, Turkish Bar Association has begun to give attorney’s licence to the dismissed judges and prosecutors. However, in this stage of the process, the Justice Ministry of Erdoğan government’s came into play and filed urgently annulment actions in the administrative courts against the acts of giving attorney’s licence.

At the same time, the justice ministry has applied in the court in request for the stay of execution. In such an atmosphere where the law system’s got paralysed, the administrative courts have naturally been accepting these requests as expected. As a result, with the application of the annulment actions in the courts, the attorney’s licenses have been deemed to be annulled until the the cases are concluded. Accordingly, as of the first hours of the coup attempt, all the precautionary measures have become taken in order not to provide living and business space for 4560 judges/prosecutors and hundreds of the lawyer academics, convicted in advance (!).

It is unknown until when ECHR and the Constitutional Court continue to condone for the unlawfulnesses to which also the Justice Ministry, local courts and some Bar Associations have made a huge contribution.