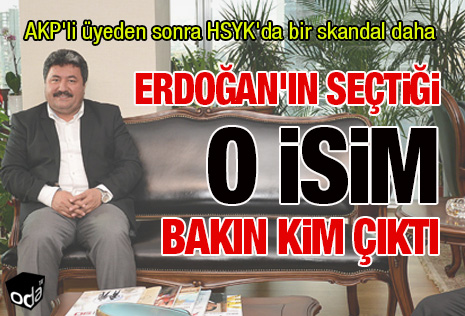 Muharrem Özkaya, the brother of Ali Özkaya who is AKP MP for Afyon and Erdogan’s lawyer was appointed as a member of HS(Y)K (High Council of Judges and Prosecutors) by Erdoğan in 2014.

Muharrem Özkaya was the Legal Advisor of the a trade union (Hizmet-İş ve Öz Orman-İş) bound to Hak-İş Confederation, which is known for its proximity to the Justice and Development Party (AKP). Furthermore, Muharrem Özkaya served as a member of the AKP Ankara Provincial Assembly. (1)

Özkaya, who served as a member of HS(Y)K until 2017, was appointed as a member of the Council of State (Supreme Administrative Court) by Erdoğan after the end of his term. In the period when Özkaya was a member, HS(Y)K was the target of both domestic and overseas reactions due to the fact that it dismissed approximately 5,000 judges and prosecutors, unlawfully, only according to the illegally recorded lists, without complying with the investigation procedures.
Özkaya’s recent social media shares gives some clues as to thoughts of this people who shaped the Turkish judiciary by dismissing thousands of judges and prosecutors and replacing them with new members of the judiciary.

With dismissals and new appointments it has been debated in the public for a long time that some sects such as Hakyol, Menzil ve İsmailağa had space in Turkish judiciary and the judges and prosecutors who belong to these sects have been assigned to important positions. (2)

The last tweets of Özkaya have brought these discussions a further point. Özkaya shared with praise an essay on tweeter entitled “Three Fateful Wars” written by Esad Coşan the leader of the congregation of Iskender Pasha, affiliated to the Naqshbandi cult, wich was published in the official website of the congregation of Iskender Pasha. He said “the owner of knowledge and wisdom, our master Professor Esad Coşan’s article which was published in the magazine “Islam” in June 1994 is being read again since last week with a different eye… we are in a very important war. Never despair.” (3)

Alican Uludag, author of Cumhuriyet newspaper reacted to Özkaya saying that Özkaya indicated his commitment to the leader of Iskender Pasha by saying “Our Master”. (4)

Another tweet of Özkaya, which has caused reactions in the social media is that the public prosecutor Yiğit Kaçar, who was dismissed by HSK, said in his tweet “The banks have lined up at my door. But I’m neither ashamed nor cared. Because there was not a single installment that I did not pay till this day on which I have been deprived of my job unfairly. So let them go and get the money from whoever stole my job, my salary. There is not a single penny you can get from me. (5) Özkaya shared a tweet in response to this tweet saying that:
“THERE ARE DOZENS OF PEOPLE WHO KNEW THAT YOU HAVE BEEN INVOLVED IN THE FETÖ TERROR ORGANIZATION FROM YOU WERE A STUDENT UNTIL YOU WERE A LAWYER.. SAY WHAT YOU WANT TO SAY WITHOUT HIDING YOU ARE A MEMBER OF FETÖ.

Özkaya, a justice of the high court of the new period, declares prosecutor Kaçar guilty in advance with a turkish which is too difficult to understand, only according to the illegally recorded lists without taking into account that; There is no conviction given by a court (presumption of innosence), there is no concrete evidence in the indictment, mr Kaçar’s case will be decided by Council of State which Mr. Özkaya is a member of.