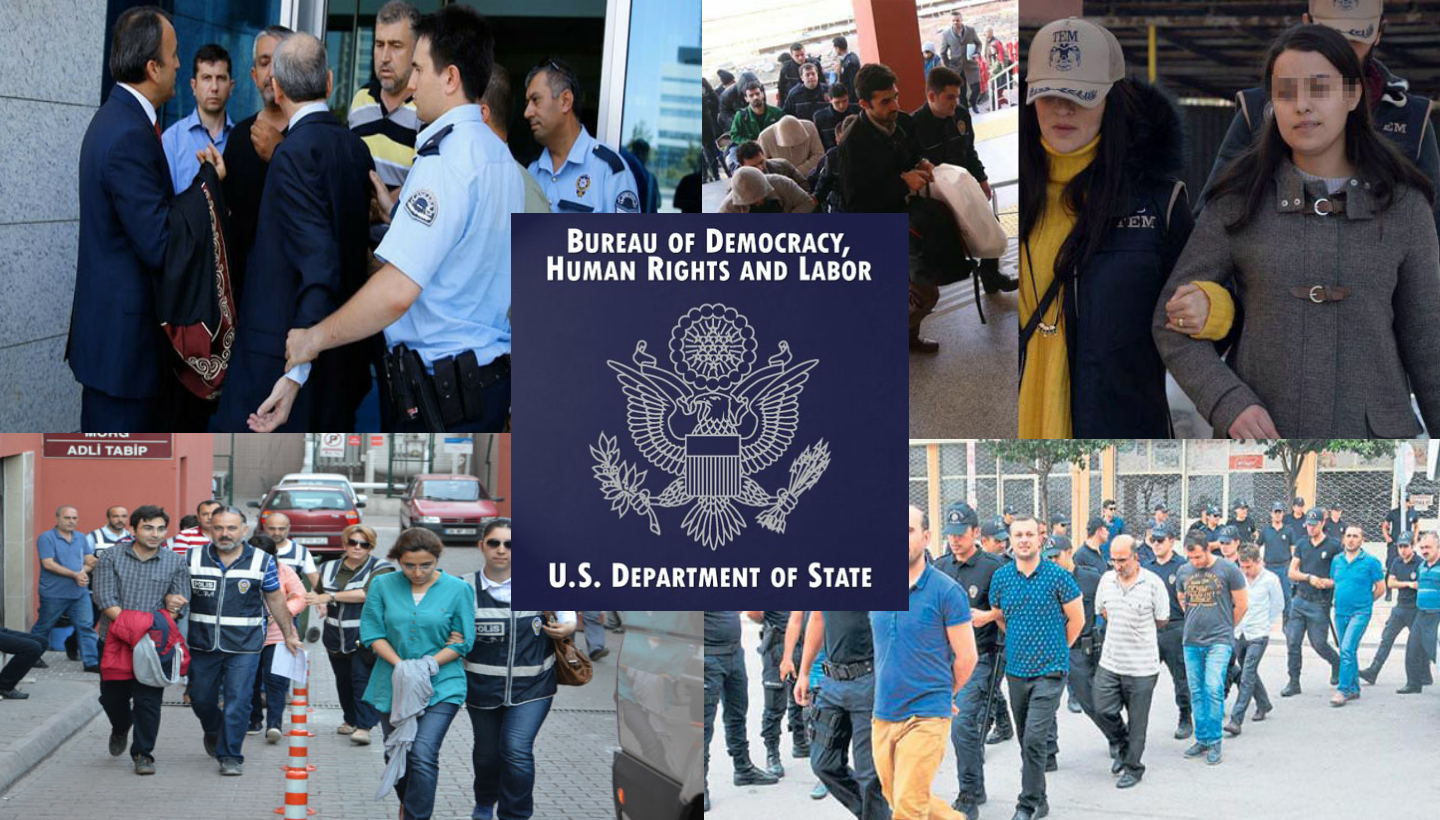 The law prohibits “arbitrary arrest and detention” and provides for the right of any person to challenge the lawfulness of arrest or detention in court, but numerous credible reports indicated the government did not always observe these requirement.

The continuing state of emergency provided the government with expanded authorities “to detain individuals for up to 30 days without charge” and deny access to counsel for up to five days. Decrees give prosecutors the right “to suspend lawyer-client privilege and to observe and record conversations” between accused persons and their legal counsel.

“Government intimidation of defense lawyers” also at times involved non-terror-related cases. In October police detained six lawyers working on a case that involved 301 victims of the 2014 Soma mining disaster for alleged membership in terrorist organizations. Critics claimed the detentions were spurious and instead aimed at silencing attorneys working on a politically sensitive case.

According to the Arrested Lawyers Initiative (which tracks legal news in the country), more than “570 lawyers have been arrested in the country since the attempted coup and another 1,400 were under prosecution” as of December 22.

August 25 state of emergency “decree increased from five to seven years the maximum time that a detainee could be held pending trial“, including for crimes against the security of the state, national defense, constitutional order, state secrets and espionage, organized crime, and terrorism-related offenses. The length of pretrial detention generally did not exceed the maximum sentence for the alleged crimes.

Detainees’ lawyers may appeal pretrial detention, although the state of emergency imposed limits on their ability to do so. The country’s judicial process allows a system of “lateral appeals to Criminal Courts of Peace that substitutes appeal to a higher court with appeal to a lateral court“. Lawyers criticized the approach, which rendered ambiguous the authority of conflicting rulings by horizontally equal courts.

The law provides for an independent judiciary, but critics alleged the “judiciary remained subject to influence, particularly from the executive branch.” Constitutional amendments narrowly approved by voters in an April referendum further diminished judicial independence. Among other powers, the amendments provided the president authority to appoint half of the country’s most senior judges and gave parliament the authority to appoint the other half. Critics expressed concern that if the president and the majority party in parliament happened to be from the same party, a single party could, in practice, appoint all the judges to the highest courts. The amendments also renamed, restructured, and reshuffled the Supreme Board of Judges and Prosecutors (HSYK), allowing the president and ruling AKP (Justice and Development Party) to appoint another slate of members to the top judicial body that assigns judges and prosecutors to the country’s courts nationwide, a role that “critics asserted became especially problematic after the removal of more than 4,000 judges and prosecutors following the July 2016 coup attempt.”

Although the constitution provides tenure for judges, the careers of judges and prosecutors are controlled through appointments, transfers, promotions, expulsions, and reprimands made by the Board of Judges and Prosecutors (HSK, formerly the HSYK) “Board leeway granted to prosecutors and judges challenges the requirement to remain impartial, and judges’ inclination to give precedence to the state’s interests contributed to inconsistent application of criminal laws.” Critics expressed concern regarding application procedures for prosecutors and judges described as highly subjective, which they warned opened the door to political litmus tests in the hiring process.

“The judiciary faced a number of challenges that sharply limited judicial independence, including the suspension, detention, or firing of judicial staff accused of affiliation with the Gulen movement.”

Observers alleged the “government also interfered with the judicial process in certain cases“, including those related to Gulenist trials. On April 3, the HSK suspended three judges who had ordered the release of 21 of 29 journalists accused of ties to Gulen and overturned the release order. Observers noted the reversal came after a progovernment social media campaign decried the decision of the judges. Some observers interpreted the move as a warning to judges who took independent decisions not in line with the government’s expectations.

“The government also targeted some defense attorneys representing a number of high-profile clients.” On September 12, police raided the Istanbul and Ankara offices of lawyers representing two detained educators on hunger strike, Nuriye Gulmen and Semih Ozakca, whose cases had triggered protests and aattracted significant national and international media attention. The raid and seizure of documents came two days before their clients’ scheduled court hearings in Ankara. On September 15, Ankara police detained Celal Celik, an attorney for the main CHP opposition leader, Kemal Kilicdaroglu, in connection with an investigation into the Gulen movement. Celik, a former Supreme Court judge, had been an outspoken critic of Gulen and was detained in part due to his cancellation of a Digiturk cable subscription. “Cancellation of Digiturk cable subscriptions after a certain date was one of the criteria authorities used to justify dismissals and arrests“, arguing that Gulen had ordered his supporters to cancel the service after it dropped several Gulen-linked channels from its cable offerings. Critics viewed Celik’s detention as an attempt to pressure or intimidate Kilicdaroglu…

The country has an inquisitorial criminal justice system. The country’s system for educating and assigning judges and prosecutors created close connections between the two groups. “Prosecutors and judges studied together at the country’s Justice Academy” before being assigned to their first official posts by the Board of Judges and Prosecutors. After appointment, “they often lodged together, shared the same office space, worked in the same courtroom for many years, and even exchanged positions during their careers“. Observers, including the European Commission, claimed this process led to the appearance of impropriety and unfairness in criminal cases. Justice officials asserted the system was designed to avoid these problems through regular reassignment of judges and prosecutors to different locations by the HSK. Human rights and bar associations noted that defense attorneys generally underwent less rigorous training than their prosecutorial counterparts and were not required to pass an examination to demonstrate a minimum level of expertise.

As written the law provides defendants a presumption of innocence and the right to be present at their trial, although in a number of high-profile cases, “defendants increasingly appeared via video link from prison, rather than in person.” Judges may “restrict lawyers’ access to defendants’ files” during the prosecution phase.

“A single judge or a panel of judges decides all cases“. Courtroom proceedings were generally public except for cases involving minors as defendants. The state increasingly used a clause allowing “closed courtrooms for hearings” and trials related to security matters, such as those related to crimes against the state. Court files, which contain indictments, case summaries, judgments, and other court pleadings, were “closed except to the parties to a case“, making it difficult to obtain information on the progress or results of the case. In some politically sensitive cases, judges cleared courtrooms and restricted access to Turkish lawyers only, “limiting the ability of domestic or international groups to observe some trials.”

Defendants have the right to be present at trial and to consult an attorney in a timely manner. Observers noted that especially in high-profile cases, courts failed to provide the defendants the right to exercise such rights. For example, Nuriye Gulmen, an academic who began a hunger strike after being dismissed from her job by a state of emergency decree following the 2016 coup attempt, “was not brought to the courtroom” for some of her hearings. Similarly, authorities “did not transfer imprisoned pro-Kurdish HDP co-chair Selahattin Demirtas to court” for his December 7 hearing, claiming a need to maintain public order.

Defendants have the right to legal representation in criminal cases and, if indigent, to have representation provided at public expense. Defendants or their attorneys could question witnesses for the prosecution, although questions must usually be presented to the judges, who are expected to ask the questions on behalf of counsel. Defendants or their attorneys could, within limits, present witnesses and evidence on their own behalf. “Secret witnesses were frequently used“, particularly in cases related to national security…

Observers noted the government “often failed to establish evidence to sustain indictments” and convictions in cases related to Gulen or supporting terrorism, highlighting growing concerns regarding respect for due process and adherence to credible evidentiary thresholds. In numerous instances, “use of the smartphone application ByLock was cited as the only evidence of alleged support for or membership in a terrorist organization.”

“The number of political prisoners” was not a matter of public record and remained a subject of debate at year’s end. In November media reported that, according to the Ministry of Justice, “62,669 prison inmates were charged with terrorism-related crimes“.. Some observers considered many of these individuals political prisoners, a charge sharply disputed by the government.

Human rights groups alleged that “many detainees had no substantial link to terrorism” and were detained to silence critical voices or weaken political opposition to the ruling AKP, particularly the pro-Kurdish HDP or its sister party, the DBP.

Authorities “used both the antiterror laws and increased powers under the state of emergency to detain individuals and seize assets“, including those of media companies, charities, businesses, pro-Kurdish groups.. and individuals alleged to be associated with the Gulen movement.

Credible media reports claimed that some persons jailed on terrorism-related charges were subject to a “variety of abuses“, including “long solitary confinement“, severe limitations on outdoor exercise and out-of-cell activity, inability to engage in professional work, denial of access to the library and media, slow medical attention, and in some cases the denial of medical treatment. Media reports also alleged that visitors to prisoners accused of terrorism-related crimes faced abuse, including limited access to family, strip searches, and degrading treatment by prison guards.

..Critics complained that, .. the large volume of appeals of “dismissals under the state of emergency and decreased judicial capacity caused by purges in the judiciary resulted in a backlog that slowed proceedings.”

Tens of thousands of individuals dismissed from government jobs appealed to the ECHR. In January the government established the “Commission of Inquiry on Practices under the State of Emergency” to adjudicate appeals of wrongfully dismissed civil servants. In May members of the commission were named and began accepting applications in July, which reached 102,000 as of September. The ECHR remanded the cases filed by Turkish nationals to the commission in July, citing the Commission of Inquiry as a suitable means of domestic redress. In late December the commission issued its first rulings on a limited number of cases. Critics complained that the appeals process was “opaque, slow, and did not respect citizens’ rights to due process“, including by prohibiting defendants from seeing the evidence against them or presenting exculpatory evidence in their defense.

According to the HRA, since the coup attempt and pursuant to state of emergency decrees, “more than 116,000 public employees had been dismissed or suspended; more than 4,000 judges and prosecutors had been dismissed; 49 private health-care facilities had been shut down; more than 2,300 private educational institutions–including schools, tutoring academies, and dormitories–had been closed along with 15 private universities and 19 unions and trade confederations; 187 media companies had been shut down; and nearly 1,600 associations or foundations had been closed.”