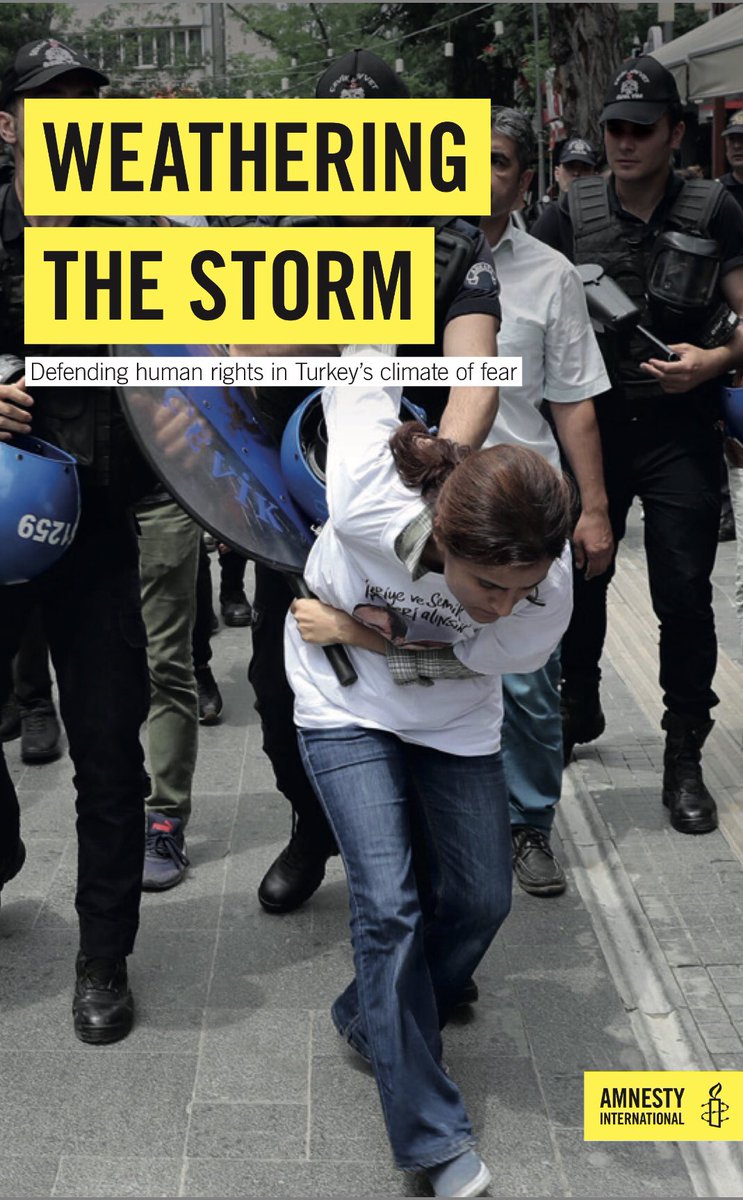 …
“A chilling climate of fear” is sweeping across Turkish society as the Turkish government continues to use the state of emergency to shrink the space for dissenting or alternative views.

This briefing focuses in particular on the ways in which the rights to freedom of expression, assembly and association, to liberty and security and to fair trials have been eroded. “Repressive measures were initially directed at those suspected of participating in the coup attempt including journalists, followed by academics, judges and prosecutors.” While these attacks have continued, the net has widened to increasingly include the relatively small but vibrant independent civil society in Turkey.

Within days of the state of emergency being declared, high-profile journalists and commentators were rounded up and subsequently prosecuted. “Large numbers of experienced and trained judges, prosecutors and other state officials were detained“, accused of supporting Fethullah Gülen, the self-exiled cleric blamed by the government for the coup attempt. “This purge of the judiciary, as well as the prosecutions of lawyers, a disregard for constitutional court decisions and many more problems in the judiciary, has seriously undermined the ability of the criminal justice system to deliver fair and impartial processes.”

“The cases of academic Mehmet Altan and columnist Şahin Alpay are indicative of the extent to which the rights to redress and fair trial have been severely affected.” In January 2018, first instance courts refused to implement two separate Constitutional Court rulings that the men were unlawfully detained. In February, Mehmet Altan was convicted and sentenced to life imprisonment without parole. In contrast, Şahin Alpay was released, subject to house arrest, on 16 March, following a second Constitutional Court ruling that his rights had been further violated by the trial court’s failure to implement its January ruling.

On 20 March, the “European Court of Human Rights issued its rulings on their cases, finding violations of the rights” to liberty and security and to freedom of expression. At the time of writing, Mehmet Altan remains in prison awaiting the outcome of his appeal.

There are no official statistics about the number of lawyers being investigated, prosecuted and detained awaiting trial, but it is estimated that “several hundred lawyers are facing criminal proceedings under the post-coup crackdown.” Some 110 members of the Contemporary Lawyers Association (ÇHD) and Lawyers for Freedom Association (ÖHD), two associations that have been closed down by executive decree, are subject to restrictions in carrying out their duties as lawyers because they are facing criminal proceedings. “Because I am being prosecuted myself, I cannot represent people in the investigation stage – so when I went to see a couple of lawyers who were being held in police custody, I was not allowed. I am effectively not a lawyer at that point.” Levent Pişkin, a lawyer who represented the Istanbul provincial branch of People’s Democratic Party (HDP) and the Party’s imprisoned former co-leader, Selahattin Demirtaş. Together with four others, he is facing prosecution for “membership of a terrorist organization” and “propaganda for a terrorist organization”, March 2018. “After the Constitutional Court decision on Mehmet Altan…I wrote a tweet welcoming the outcome… I immediately received messages from people saying ‘what are you thinking? You are drawing attention to yourself. They will put you in jail. You are jeopardising everyone else too.” Orhan Kemal Cengiz, human rights lawyer who represented Mehmet Altan currently facing prosecution himself.

Human rights defenders, and indeed “anybody critical of the government, fear, with justification, that at any moment they may be taken into police custody” and subsequently rremandedin pre-trial detention on baseless charges. Many defenders have either been detained themselves or will know someone who has.

“The aim is to maintain the climate of fear. When you are in police detention, you are very scared for your family. We are all scared… It’s arbitrary, it’s not predictable, it cannot be effectively challenged so there is impunity.”