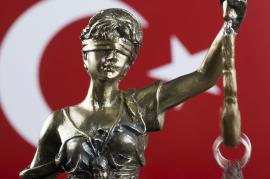 Since the coup d’état of July 15, 2016, civil servants, magistrates and lawyers can no longer exercise freely in Turkey. And find no help in the ECHR waiting for domestic remedies to be exhausted to intervene.

Can we remain indifferent to the situation of our Turkish colleagues and more generally of all those who practice law in Turkey? How long will Europe close its eyes to what is becoming difficult to endure?

Let’s briefly recall the facts. On July 15, 2016, Turkey was the victim of a coup attempt organized by a group from the army. The operation failed and was condemned by the international community. It has killed 248 people and injured 2,000. The President of the Republic Recep Erdogan declared a state of emergency on the spot and conferred extraordinary powers on the government for a period of 3 months.

The members of the Gulenist movement have been named responsible for the coup by the Turkish authorities. Yet Fethulah Gulen, who lives in the United States, has always denied being behind the operation even though it is clear that his movement has, for 40 years, largely infiltrated institutions and the judiciary. But it is worth remembering that this party was long allied to that of Mr. Erdogan and that he operated legally until 2014. He was then brutally described as “terrorist organization Fethullahist / structure parallel State “.

Since then, the state of emergency has been prolonged several times. And the measures that have been taken in his name seem to go well beyond what is “necessary and proportionate”. In the aftermath of the attempted coup d’etat, the first measures of purge were taken against the central administration, the judiciary and other public institutions, aimed at real or perceived members of the movement. Mr. Gulen, formerly ally. Therefore, today, anyone suspected of belonging to the gallerist (legal party until 2014) becomes legally a potential terrorist …

As a result, countless citizens have been arrested, including lawyers, judges, university professors and law students. People who look like the ones we meet daily at the courthouse or at the faculty. People who, like us, have made the search for the right an ideal … The figures are impressive since a quarter of the judges and prosecutors in Turkey, one-tenth of the police and 30% of the staff of the Ministry of Foreign Affairs have been dismissed as have been more than 5,000 members of higher education.

Can these figures be those of a democratic system?

The state of emergency has been renewed several times … It is true that the situation of Turkey – which faces terrorism on various fronts and is also involved in the fight against terrorism – is not easy. It is also true that the notion of a state of emergency makes it possible to envisage certain derogations from human rights. This is provided for in Article 15 of the European Convention on Human Rights. But the notion can not justify everything. It can not in any way give “carte blanche” to the authority. And certainly does not sanction the offense of opinion real or supposed. There is every reason to believe that “the use of the state of emergency goes well beyond what is permitted by the Turkish constitution and international law” as the Venice Commission recalls.

We were given the opportunity to meet one of our Turkish colleagues currently in France who described the situation of his country. And this is how we brought about fifty appeals to the European Court of Human Rights (ECHR) on behalf of senior judges, university professors, lawyers and students in law. How to refuse?

The purges were operated from lists of names attached to the government decree. But it is to be feared that the first arrests of July 2016, the day after the coup state, were made only from lists prepared well before the coup attempt … and in disregard of the most basic rights. Magistrates were arrested at the hearing, handcuffed in front of the public. Others were arrested at home while they were with the family and had a meal … The motives are often so obscure that it is sometimes feared that the purge was used as a pretext for settling scores between colleagues … people are detained preventively for no apparent reason, under conditions often inadmissible, without access to their file.

Above all, the social consequences of the measures applied under the state of emergency are dramatic: the revoked persons have had their passports canceled. They are under the definitive prohibition of finding a post in the public administration or in institutions linked to it. They do not have access to a social security scheme and all their assets have been confiscated (which raises questions about the protection of property rights). Their families are also affected by these measures. The terrible expression of “civil death” has been used repeatedly in the Council of Europe to describe the situation of these unfortunate people.

And things are getting worse. More recently, there have been reports of torture and ill-treatment of detainees, as well as unworthy attitudes towards women. Woe to him who is on the wrong side. The reports submitted by Mrs Indebjerg Godskesen and Mrs Marianne Mikko to the ECHR are edifying. How can this dramatic situation be managed later by Turkish society? How can this trauma be overcome later? It is a humanitarian problem.

We can not be aware of the real situation because the media was also muzzled. A decree of July 2016 ordered the closure of radio stations, television channels, daily newspapers and periodicals. 2,500 journalists lost their jobs, 150 journalists were detained. And access to the internet is increasingly restricted.

What happened on the court?

At first, the arrested magistrates thought that they could directly appeal to the ECHR because the Turkish constitutional court was no longer able – according to them and given the situation – to judge impartially. The European Court dismissed them, as was the case with Judge Mercan: the plaintiff was required to appeal to the Constitutional Court of an individual complaint concerning her complaint. She did not do it ; domestic remedies have not been exhausted. The application was therefore inadmissible (ECHR, 8 Nov. 2016, No. 56511/16, EDH Conv., Article 35 § 1). But as the Turkish constitutional court does not seem to want to rule when it is seized … a feeling of helplessness, unfairness, denial of justice and abandonment has developed throughout the country. So no one seems to want to judge the situation, nor in Turkey,

The Turkish government then proposed, by decree-law no 685 of 23 January 2017, the creation of a new administrative body: the “administrative commission of inquiry into the measures of the state of emergency”, in charge of proposing an appeal. national level to those wishing to challenge the measures taken. This committee would thus be competent to examine cases of dismissal of officials, cancellation of scholarships, closures of associations or educational institutions, radio stations …; is the jurisdictional vacuum filled? Nothing is less sure.

Yet the Council of Europe welcomed this decision, hailing what might look like a “load shedding commission” of a congested European court. It is so very true that applications submitted to the ECHR in February 2017 were recently rejected on the grounds that “the commission of inquiry into the measures of the state of emergency” had not been seized and that remedies were not exhausted (EDV Conv., Article 35 § 1). The referral to this administrative (and not judicial) commission would therefore constitute an “internal appeal”. However, it should be known that this famous commission, wanted by the power in January 2017, would have been operational only from the month of August (the time to appoint the judges and to set it up).

This commission should be seized – at least – of about 200,000 appeals. In the best case, even working 7 days a week, it will only be able to study 10,000 appeals a year. The totality of the files will be able to be evacuated only after 20 years … To this is added “the exhaustion of the domestic remedies” (because the decision of the commission can be struck appeal then a appeal to the constitutional court …). There is a strong risk to the ECHR, to talk about it again in 20 years … Where are the “reasonable delays”?

But above all, are the judges who form this commission independent of power? Are they free and impartial? This is a question at a time when the report on the progress of Turkey Europe relations in 2016 indicates a decline in the independence of the judiciary in Turkey, deplores great political pressure on judges and prosecutors, a the separation of powers and the independence of the judiciary.

It is obvious that the applicants are expecting a lot from the European Court. And beyond, all who believe in justice, law and truth. The notion of “human rights” is going to be put to the test by Turkey. She has no choice but to triumph. And yet we have fears.

If the ECHR were to somehow confess its helplessness, it would obviously be fatal for the future of democracies in Europe. All human rights defenders must now mobilize. Because human rights – and the message of freedom they convey – have a universal vocation. They are not intended to apply only in the narrow context of a Europe frightened, divided, folded on itself and would ask existential questions.

Perhaps it is necessary to meditate on the phrase of Voltaire, who said in his Essay on Morals : “It is necessary that our part of Europe had in its manners and in its genius a character which is not found in Thrace, where the Turks established the siege of their empire, nor in the Tartary from which they formerly came. Three things constantly affect men’s minds, climate, government, and religion. This is the only way to explain the enigma of this world.

*Labbée Xavier, professor at the University of Lille