A new document reveals that Ankara public prosecutor considered the non-criminal acts as the evidence for terrorism and coup against arrested judges and prosecutors: 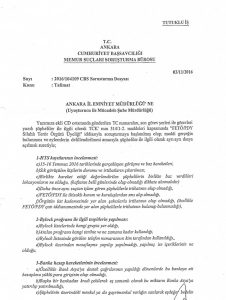 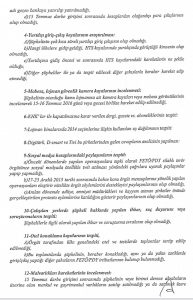 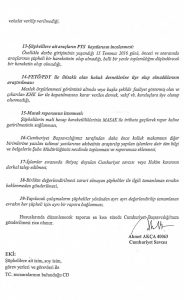 Here is the translation of the document:

TO ANKARA PROVINCIAL POLICE DEPARTMENT (Section of Fight Against Drugs)

Regarding the Turkish ID numbers sent in the CD attached to our article, their last duty locations and the suspects whose duties are written, the TCK’s (Turkish Penal Code) 314 / 1-2. an investigation has been initiated with the allegation of “FETÖ / PDY Armed Terrorist Organization membership”; by opening separate files for the suspects in order to find the material truth and to prove the actions.

c) What are the locations where the mobile phones of suspects who are considered to be acting together give signals together, (whether it is on certain days of the week or not)

d) Whether he has any contact with suspects who were previously committed for the same crime,

e) Whether he has received SMS from the institutions and organizations affiliated with FETÖ / PDY,

2- Making determinations about the ByLock program:

a) Which group the suspect is in the ByLock lists,

b) The date and until when the suspect used the mentioned program,

c) Who uses the phone number seen in the ByLock list,

d) Whether messaging is done via ByLock, and if so, what is their content,

a) Whether there is a large amount of money entering the accounts of this bank, especially during the periods when support calls are made to Bank Asya,

b) Whether this amount is deposited to Bank Asya simultaneously by withdrawing a loan from another bank,

c) Whether the movable or immovable asset on the suspect is sold and the equivalent price has been deposited in the said bank.

d) Whether there were any unusual outflows from accounts after the July 15 coup attempt,

a) Whether the suspect has entered and exited abroad for a very short time,

b) To which countries he has traveled and whether there is anyone with whom he has met abroad in the HTS records,

c) What are the movements in HTS records before and after going abroad?

d) Whether he acted with other suspects or other persons to be identified.

Determining whether the suspect is moving together on the night of July 15-16, 2016 by examining the camera records of the residence or the Mobese camera records,

6- Determination of the subscriptions to “the magazine, journal etc. decided to be closed with the Decree Laws”,

7- Determination of the distribution of votes in the lodging buildings regarding the 2014 elections,

8- Analysis of answers from DigiTurk, D-Smart and Tivibu companies,

a) In response to the operations carried out in the previous periods, whether he made posts by following the calls of the armed terrorist organization FETÖ / PDY to twit on social media,

b) Whether there are any posts that support the organization’s statements that criticize the operations carried out against the members of the said organization after 17-25 December 2013,

c) Whether there were posts showing that he participated in the protests held in front of the courthouses, police directorates and trustee-appointed companies during the said period

10- Detection of denunciations, criminal complaints or investigations made about the suspect in the places of work:

Whether there are denunciation and investigation documents regarding the suspects,

a) Whether meetings are organized by the organization in hotels and facilities throughout the country,

b) In these meetings, whether the other persons with whom the suspect stayed together or entered / exited the hotel on the same or recent dates have FETÖ / PDY contacts,

Whether the movable and immovable assets on the suspect or his/her first-degree relatives are sold or given a power of attorney to be sold after the July 15 coup attempt,

13- Examination of the PTS (vehicle license plate recognition system) records of the vehicles belonging to the suspects:

14- Investigation of whether they are members of legal associations affiliated with FETÖ / PDY: Determining whether you are a member of associations, foundations, etc., which have operated under the guise of professional organization or otherwise and decided to be closed with the decree law,

Ensuring that the financial account movements of suspects are reported by contacting MASAK (Financial Crimes Investigation Board),

16- Investigating the fate of the instructions written by our Office of the Chief Public Prosecutor to other units of the law enforcement authority, collecting in your Branch Office all information and documents regarding the transactions made in relation to them and adding them to your report,

17- Immediate request for the decision of the public prosecutor or judge needed during the investigations,

18- Sending without waiting of the completed documents regarding the suspects who do not have to be evaluated together,

19- Evaluating the work to be done in terms of the suspects separately, connecting the completed documents to a separate report for each suspect,

It is requested that the report to be prepared regarding its issues be sent to our Office of the Chief Public Prosecutor as soon as possible.

Name, surname of the suspects, with their places of duty and duties, CD with Turkish ID numbers