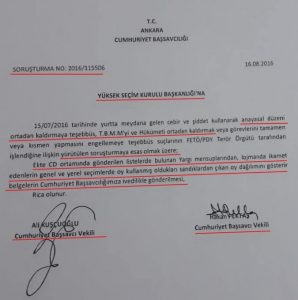 Translation of the document as follows:

TO THE CHAIRMANSHIP OF SUPREME COMMITTEE OF ELECTIONS

On the basis of the investigation conducted regarding the commitment of the crimes of attempting to overthrow the constitutional order by using force and violence on 15.07.2016 by the FETÖ / PDY Terrorist Organization;

Sending the documents showing the distribution of votes from the ballot boxes where the members of the judiciary in the lists sent on CD in the attachment, those who live in the public housing cast their votes in the general and local elections, to our Office of Chief Public Prosecutor immediately;