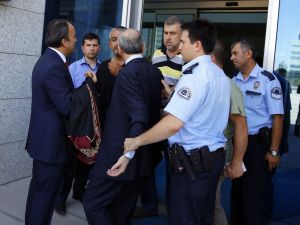 The arrested member of the Council of State (Supreme Administratice Court) Mehmet Çelik delivered his defense in the hearing held by 9th Penal Chamber of the Court of Cassation, acting as a first instance court, in general assembly hall of the Supreme Court. Justice M. Çelik, his relatives and lawyer appeared in the court for the hearing.

Being recognised for his defense, M. Çelik denied all the accusations leveled against him.

Çelik also responded the accusation as to that the case filed by the candidate judge Gülay Tezcan who was removed from the office on the grounds that she missed the training classes for two days was dropped upon the order of the organisation by the plenary sessions of the chambers for administrative cases of the Council of State. Asserting that he had not acted in accordance with the order of anyone, Çelik said: “No need for anyone to give direction to me, If a recruit judge does not attend classes for two days and afterwards attempts to take a fake medical report , I also make the same decision today. Such a person behaves like this can not be a judge. Also today, I am of the same mind”.

Also speaking to confessor witness reports about him, Çelik defended that the confessor witnesses had tried to save themselves. He claimed: “Those people were made confessors being said they could not get out of the prison otherwise. I was also offered to do so”.

Rejecting that he had used ByLock app, Çelik said: “A senior judge of the state can not be a member of a terror organisation. I did not download ByLock app and also not use it. No content, no message, no information. So, I don’t ask for my release under such conditions”.

Following the break, the panel of judge announced their interlocutory decision. Accordingly, the court ruled the continuation of pre-trial detention for M. Çelik.