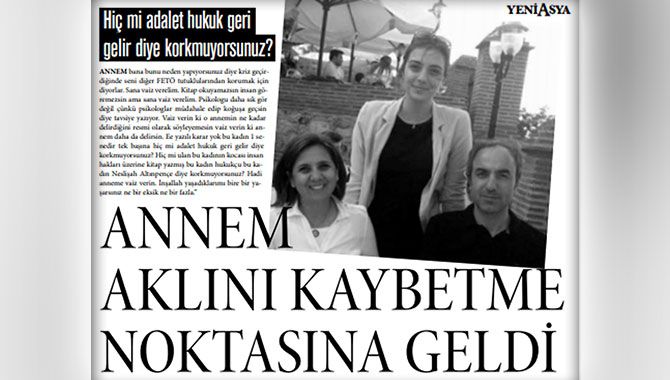 Neslihan Ekinci, judge in Istanbul province and the former secretary general of the Supreme Board of Judges and Prosecutors (HSYK), and her husband Dr. Huseyin Ekinci, judge and the former chief reporter of the Constitutional Court, were arrested after following a controversial coup attempt on July 15, 2016 as part of the Turkish government’s post-coup witch hunt targeting the alleged followers of the Gülen movement.

The only child of the family, Rana Ekinci, expressed her sadness about parents` protracted imprisonment. “My mother and father will have been in jail for 25 months until the next trial, which means 8 seasons without being sentenced.”

Neslihan Ekinci had been held in solitary confinement in prison more than a year without bill of indictment. This situation has been exposed to inhuman treatment in jail according to her daughter Rana.

“My mother has been suffering from a severe trauma along with being on the verge of going mad.” After the report on Yeni Asya Newspaper, one more prisoner has been settled into Ekinci`s cell.

‘‘The trial has been postponed to on August,19. So my mother and father will have been in prison for 25 months without being sentenced. Isn`t imprisonment a caution to the risk of escape? In this country, even rapists do not sentenced to 25 months. But my family will be kept in jail for 25 months. The court cannot conclude a case in 2 years as it is already contrary to the right to a fair trial. My mother had been in lockdown for 23 months. She can just see her daughter once a week and her husband once a month. In last two years, my mom, dad and I could not come together in the same place. What can I tell else?” Rana reacted.