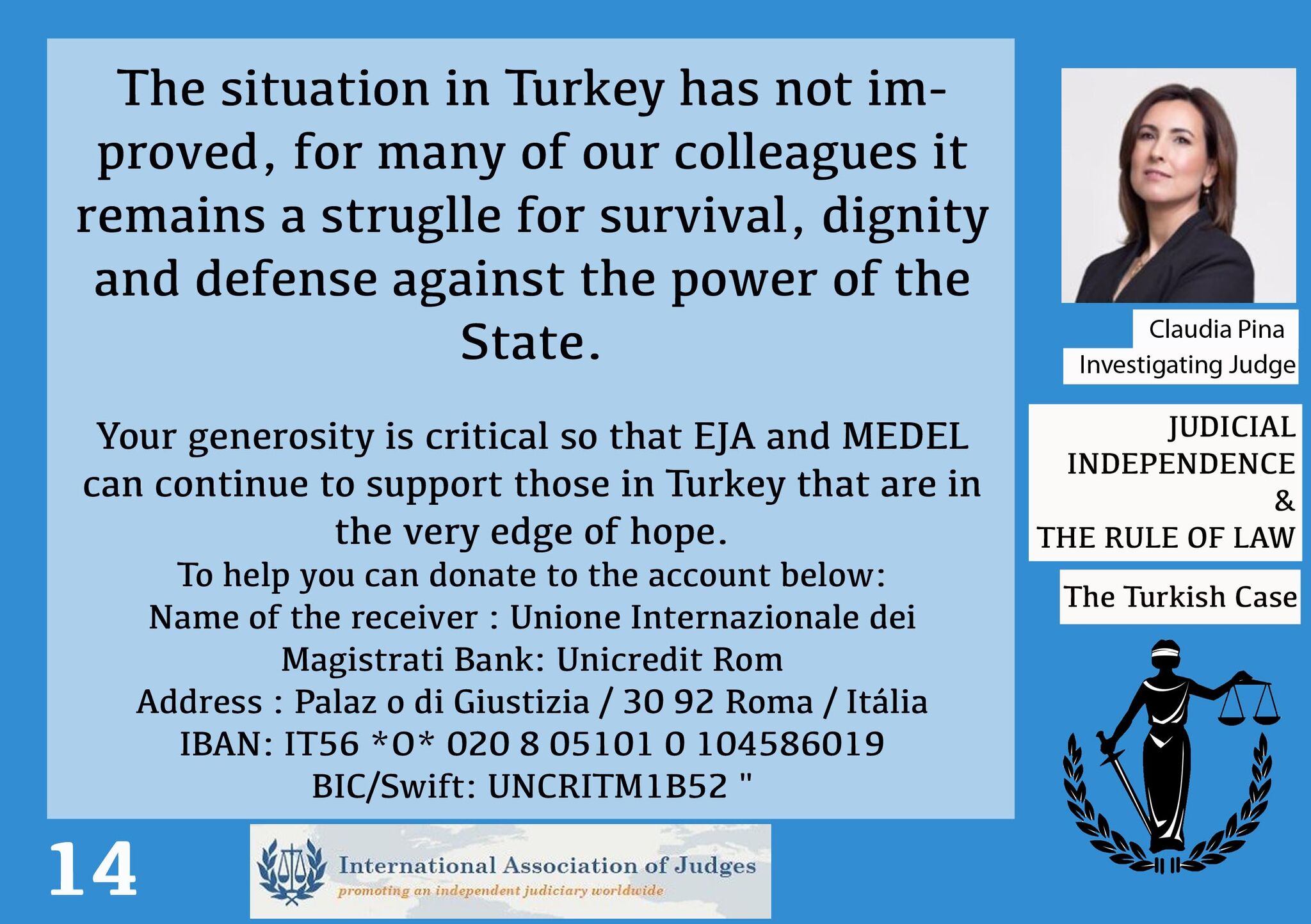 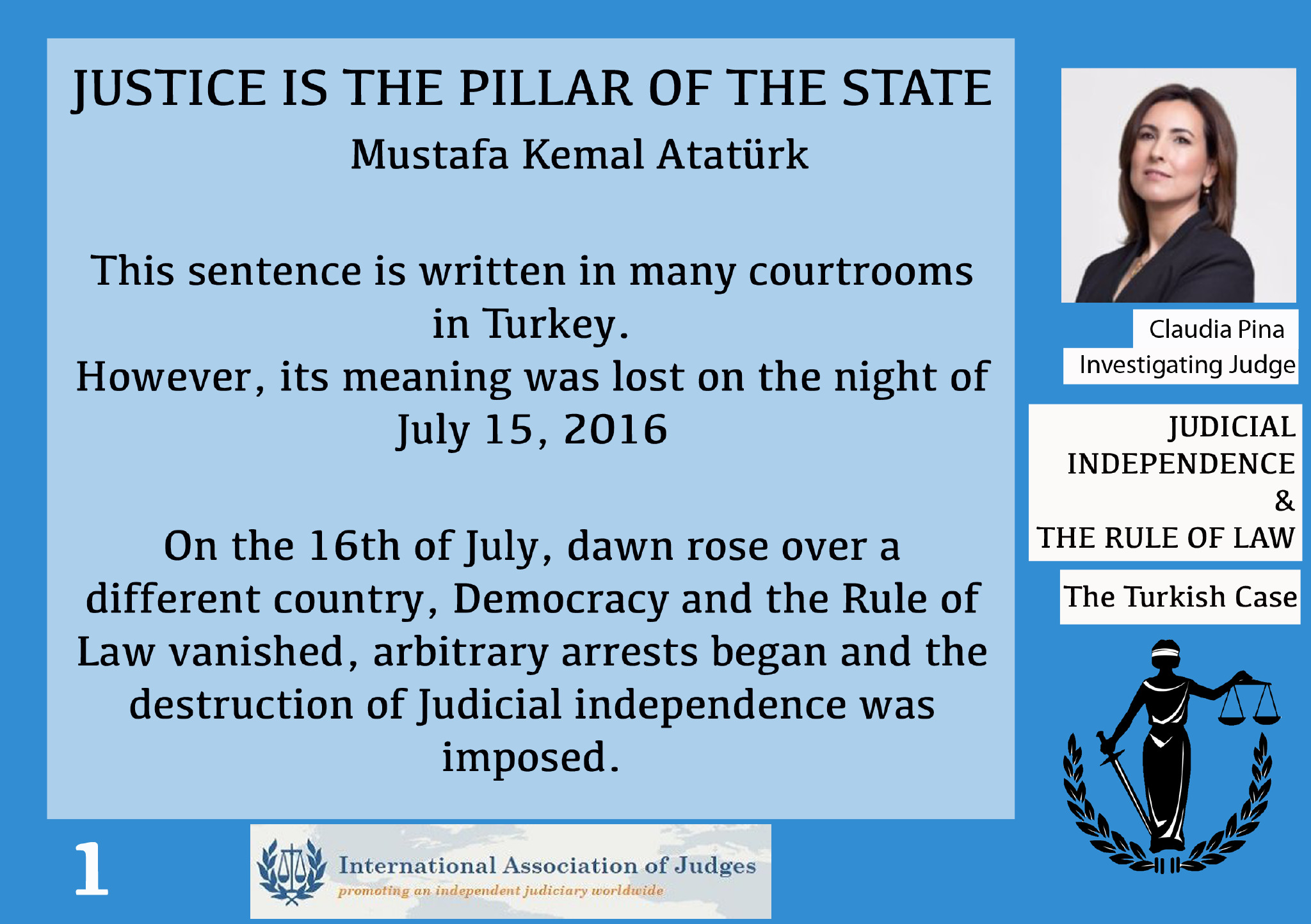 Portuguese Judge Claudia Pina made a presentation about the situation of Turkish Judges in Portuguese Association’s Congress.

1- JUDICIAL INDEPENDENCE and THE RULE OF LAW

2- JUSTICE IS THE PILLAR OF THE STATE

Mustafa Kemal Atatürk
3- “This sentence is written in many courtrooms in Turkey.

4- “On the 16th of July, dawn rose over a different country, Democracy and the Rule of Law vanished, arbitrary arrests began and thedestruction of Judicial independence was imposed.”

FETÖ or Gülen Organization is deemed responsible for the attempted Coup.

Thousand of public servants, military personnel, police officers, judges and prosecutors were arrested or dismissed under the accusations of being members of FËTO.

The State of Emergency is declared.

Turkey partially suspends its obligation resulting from the European Convention of Human Rights.”

Transfer by Decree of 610 Judges in Courts of First Instance and Apeal Courts.”

Detained : • 2431 – althought it is not possible to asses how many are detained in isolation

Subject to coercive measure other than pre-trial detention : •1311 ”

Membership of the FËTO Terrorist Organization.

In numerous cases, the use of the Bylock messaging application, allegedly used by FËTO members.

The generic reference of belonging to FETO, the absence ofconnection between facts, evidence and discernible subjects is a pattern, that can be verified in the decision of the Council of Judges and Prosecutors from 31.08.2016,  that dismissed over a thousand people in a 60 pages ruling.”

9- “One of the detainees is Murat Arslan, President of the YARSAV Judges and Prosecutors association, that was dissolved in the meantime. International Association of Judges have nominated him for the Vaclav Havel Award. He win this Award ! ”

11- ” Among the detainees was prosecutor Seyfettin Yiğit, who was responsible for the investigation of a corruption case involving the family of President Erdoğan. September 2016 he commited suicide in prison.”

13- “All non democratic or corrupt political power fears an independent Justice. Freedom and Independence are not to be taken for granted, they must be used and conquered everyday.”

14- “Excerts from letters sent to the European Judges Association

“I have been working as a judge in Turkey for 5 and a half years. An armed group tryed to take over the country on 15th of July 2016, approximately at 2 ,0 pm. After two hours the coup attempt was under control. Afterwards, a list of judges’s names allegedly involved was published on the internet and 2.700 judges were removed from duty. We (my husband and I ) were detained on the suspicion of being members of the terrorist organization involved in the coup attempt, although there is not any evidence. We submited ourselves to the police. However, we were subjected to inhuman treatments. I wish they would release my husband. There is not any evidence he is a terrorist.

I am afraid of being arrested for sending this letter to you. I hope you wil find a remedy for the violations of our fundamental rights and freedoms.”

15- “I have worked for twenty years as a judge. Throughout my life, I have defended “Pluralist Democracy”, “The Rule of Law” and “human rights”. I will continue to do so. I have opposed all forms of “terror” and “violence”. I’ve always been away from everyday politics. After the 15th of July, I was first suspended, then I was dismissed from my job without the possibility to defend myself. All my assets were seized. I was removed from the house where I lived. My credit cards were canceled. I was put in a situation where I cannot withdraw money from the bank and I am unable to support my family. I am stigmatized as a “terrorist” and a “putschist” without any evidence and against the presumption of innocence. If nobody speaks up for us, tomorrow this fire of lawlessness will take up everywhere. There are thousands of applications waiting in front of the ECHR. We want those applications discussed as soon as possible. We want that an effort is made to ensure that the Law is  respected as soon as possible. “

16- “Those who were arrested or dismissed were labelled as terrorists, they lost their salary and many also their freedom.

Taking into consideration the appeals that reached the EAJ and Medel, a fund was setup to support them in basic expenses and legal defense fees, to which many European colleagues have generously contributed.”

17- “At the present time about 40.000 € have already been sent by the Fund to judges, prosecutors or their spouses.

About 50 families, that friends and colleagues in Turkey cannot help with fear of being labelled as terrorists, have been impacted by this support.”

“ Thank you for the 3.370,96 Turkish Liras you sent me. I bought some books for my children. This situation is tragic for me. Because my children feel everything. My life and theirs changed. I hid the receipt. How can I sent it to you? If I restart my career as a judge, I want to pay you back.”

“ I got the money you sent me. Thanks so much for your help. I really appreciate it. My husband has been in jail for 8 months. I moved to Izmir where my husband’s parents live. Our families helped me a little. Our assets were frozen and we don’t have any health insurance. After all these tragic events, your support came and move me to tears. “

19- “Our voice cannot be limited to criticizing the Turkish Regime, it must be a voice of hope for all : those who are still in prison, those who were dismissed and those who carry on doing their job.

This voice needs to be heard by European Institutions, by Turkey, but also by Poland, Hungary and Bulgaria, where similar situations occur.

It needs to be the an academic critique to the European Court of Human Rights decisions, when they reject the appeals from the citizens of a country with no independent justice, on the grounds that internal remedies have not been exhausted.”

20- “What if those remaining in their job were us ?

Are we supporters of the regime ?

21- “ You must prepare, you also, if that is possible. You must decide which of your ownselves wil fight and which wil surrender. One of them will surely be terrified. You shall decide which can and cannot be silenced, you shall settle all the scores that can be settled.“

22- “ The situation in Turkey has not improved, for many of our colleagues it remains a struglle for survival, dignity and defense against the power of the State. Your generosity is critical so that EJA and MEDEL can continue to support those in Turkey that are in the very edge of hope. To help you can donate to the account below: 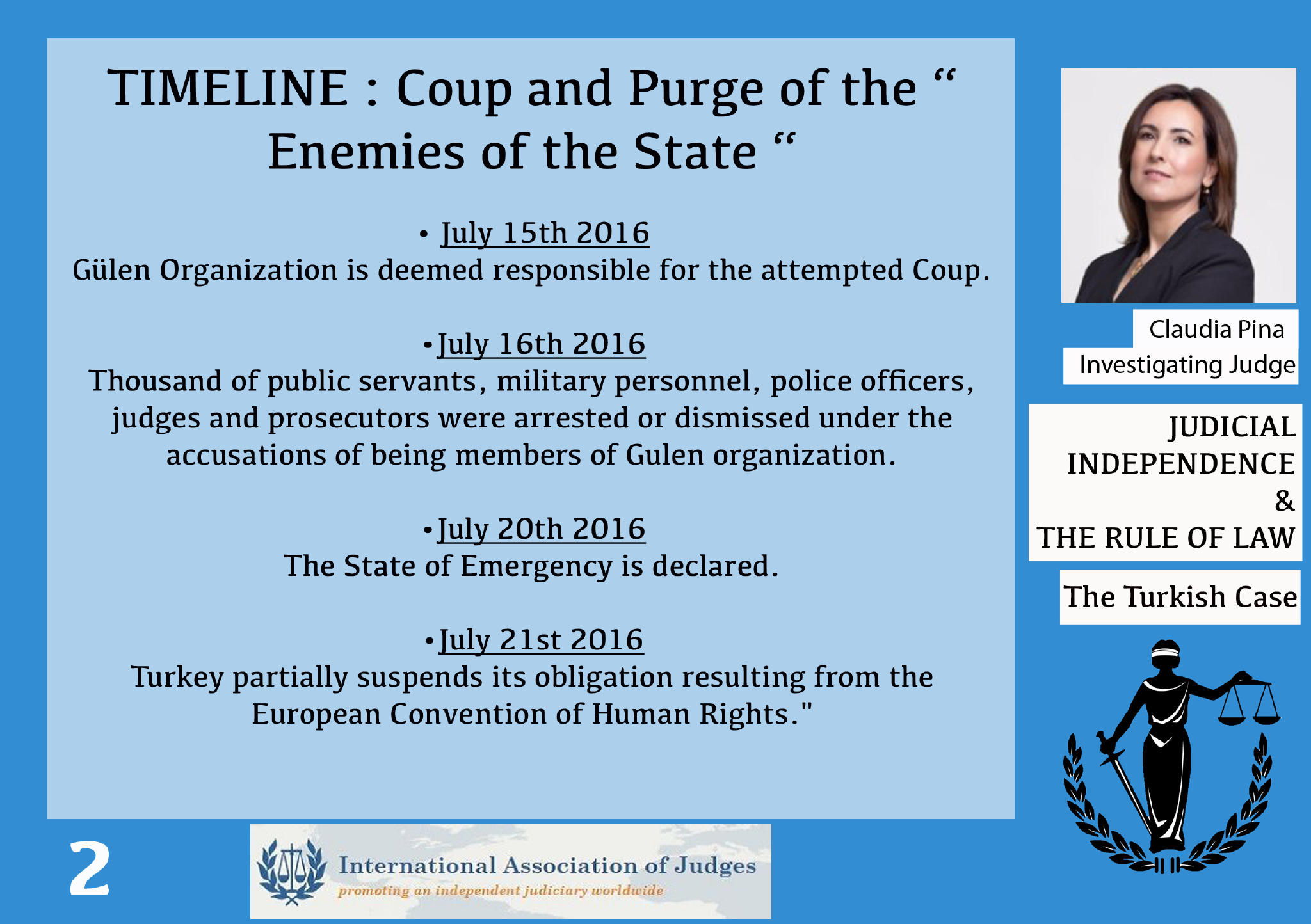 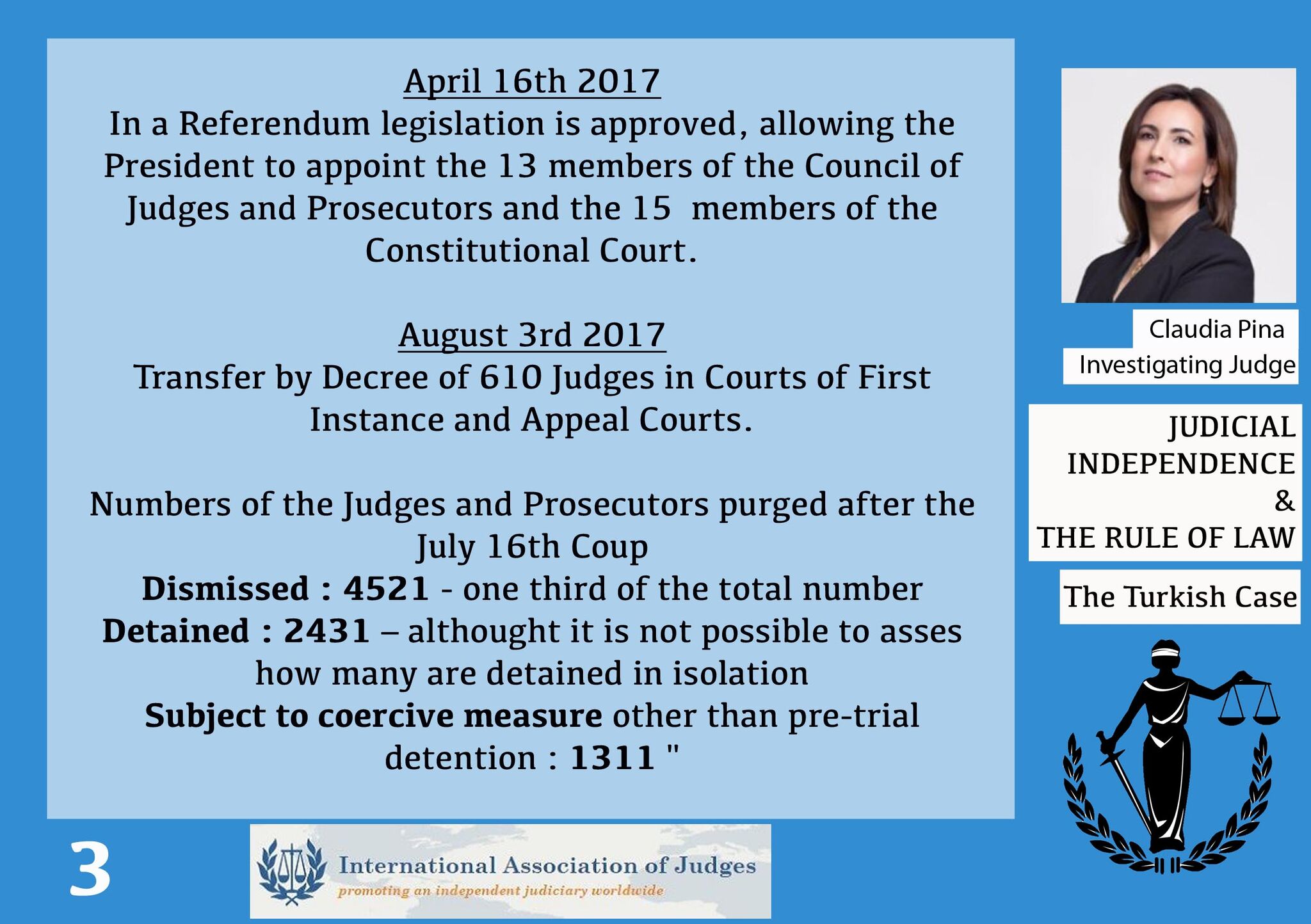 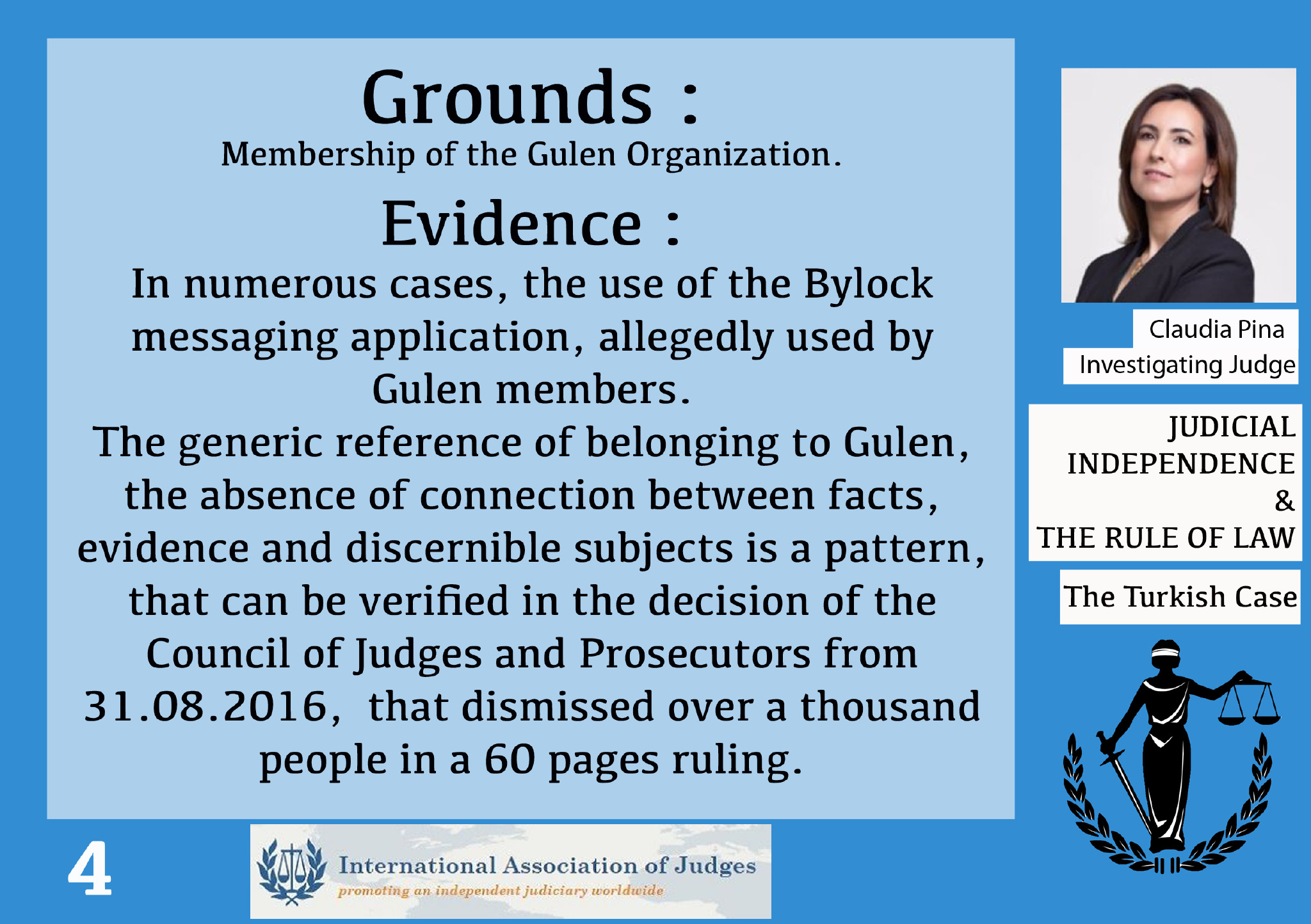 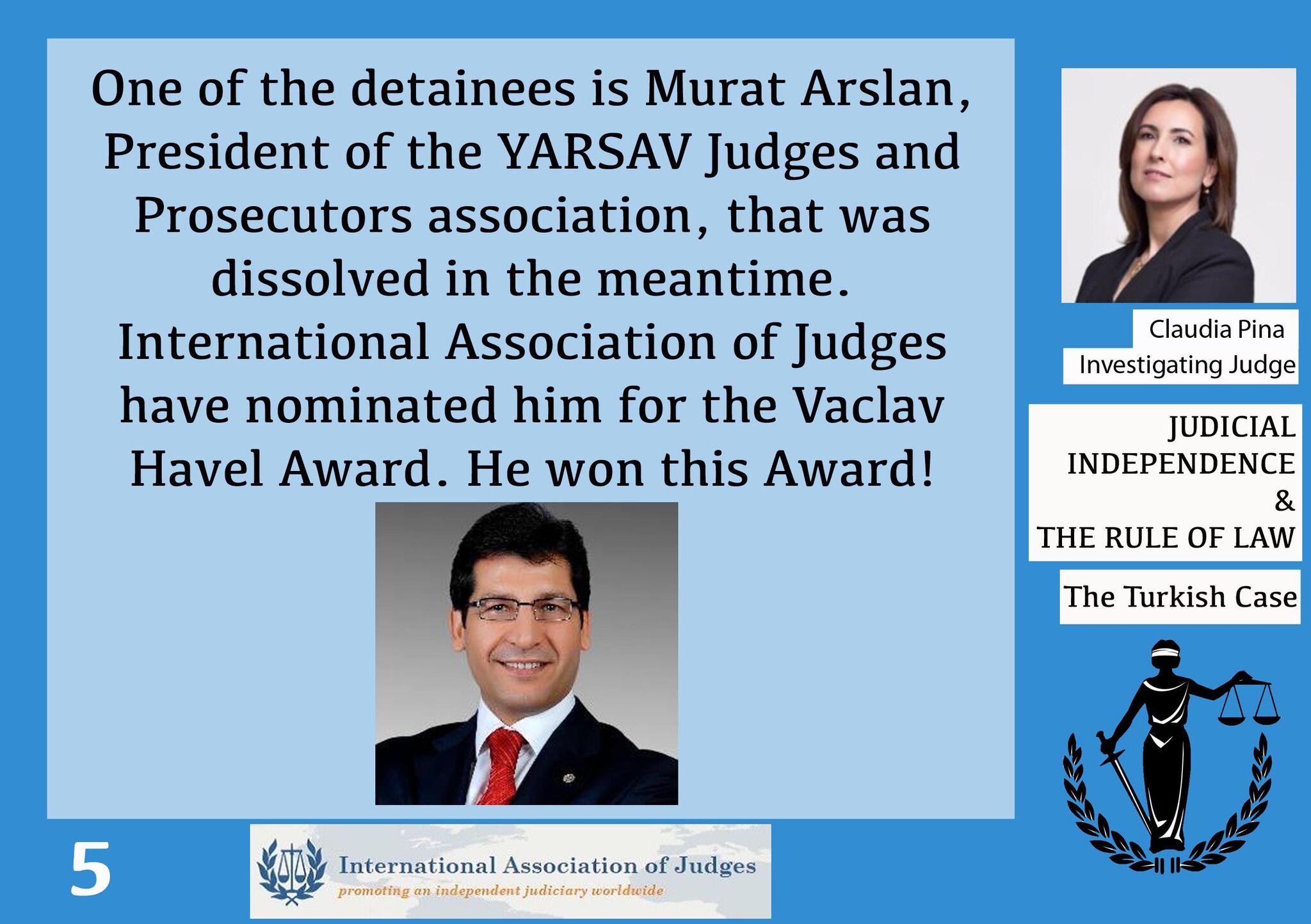 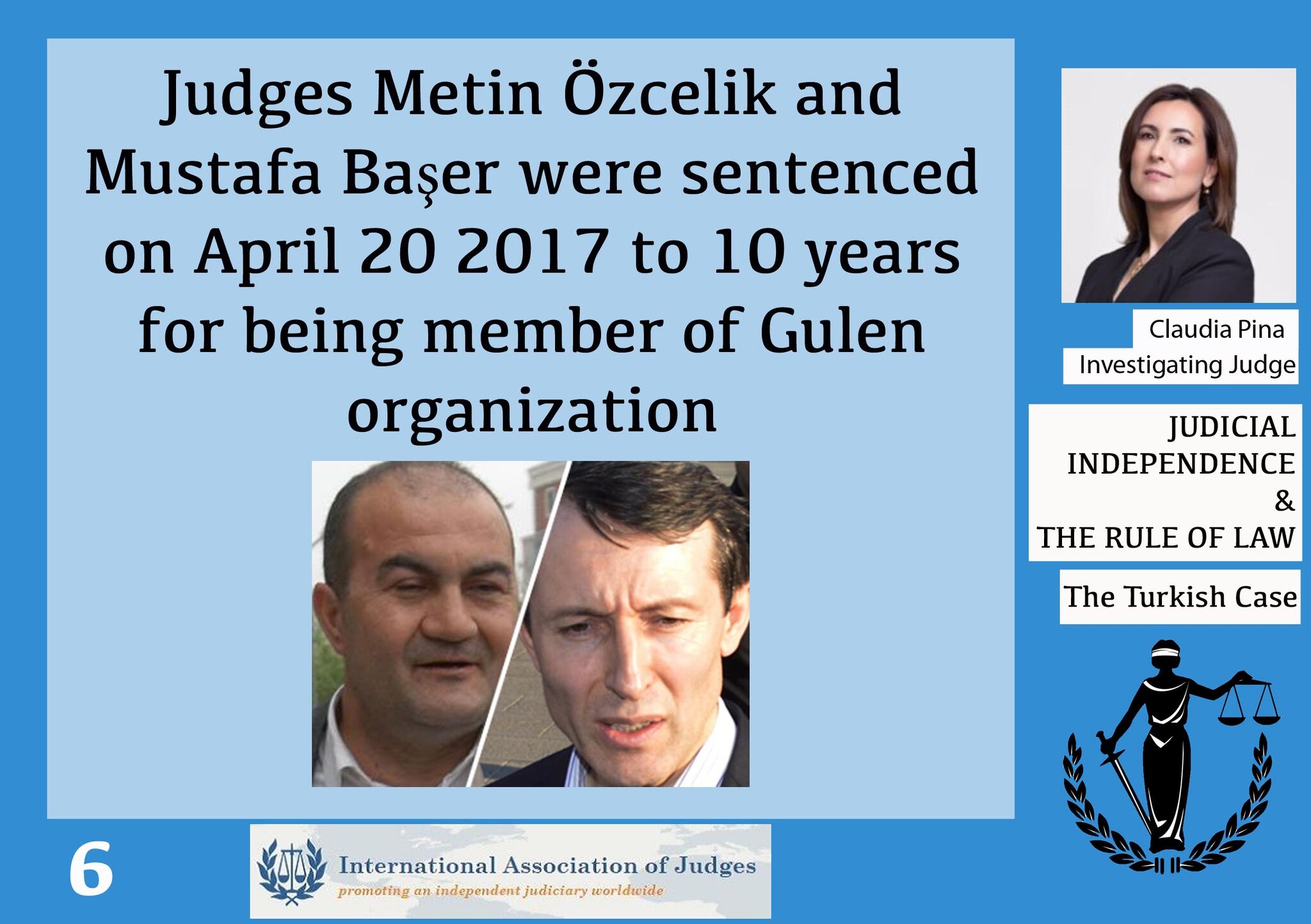 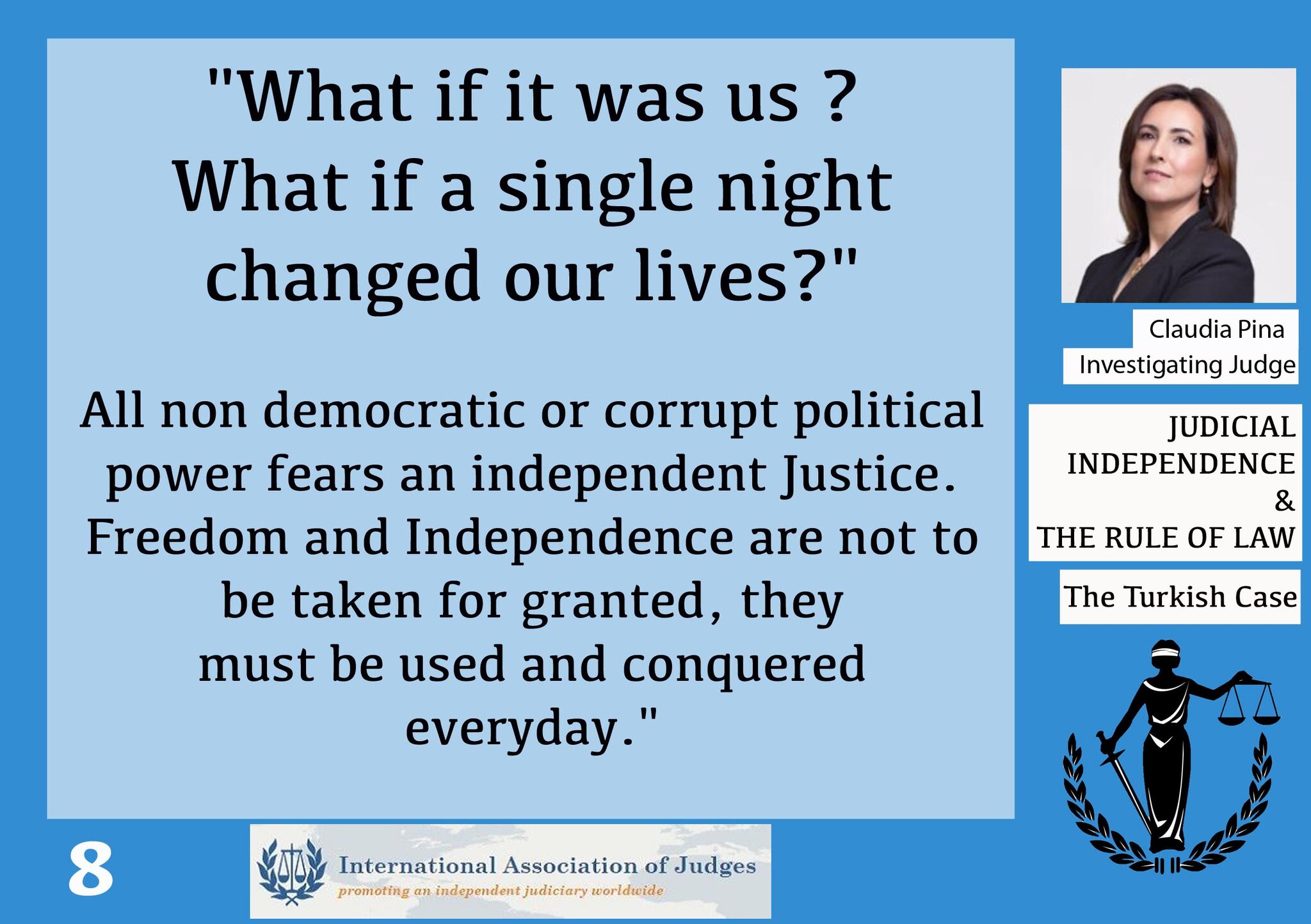 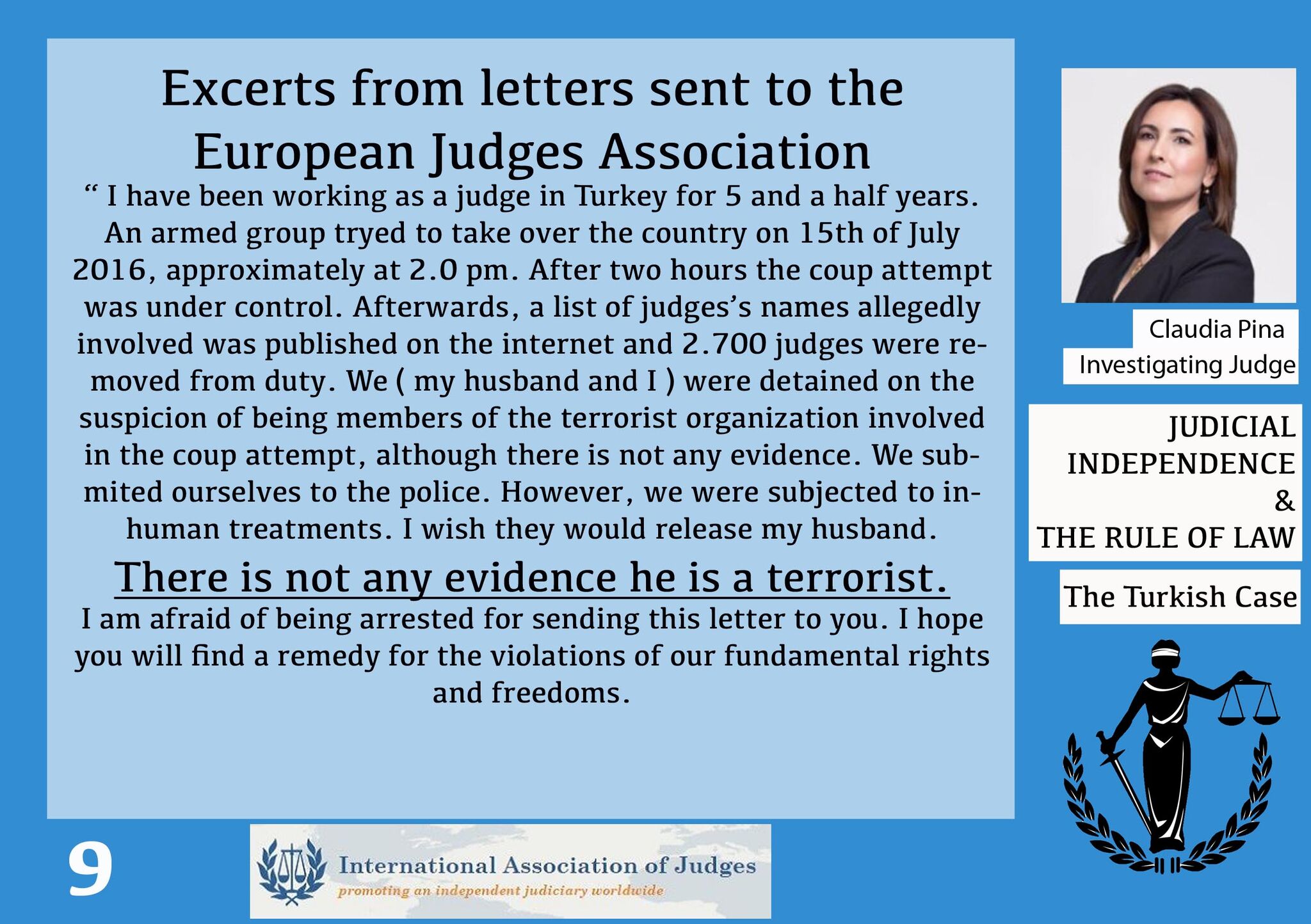 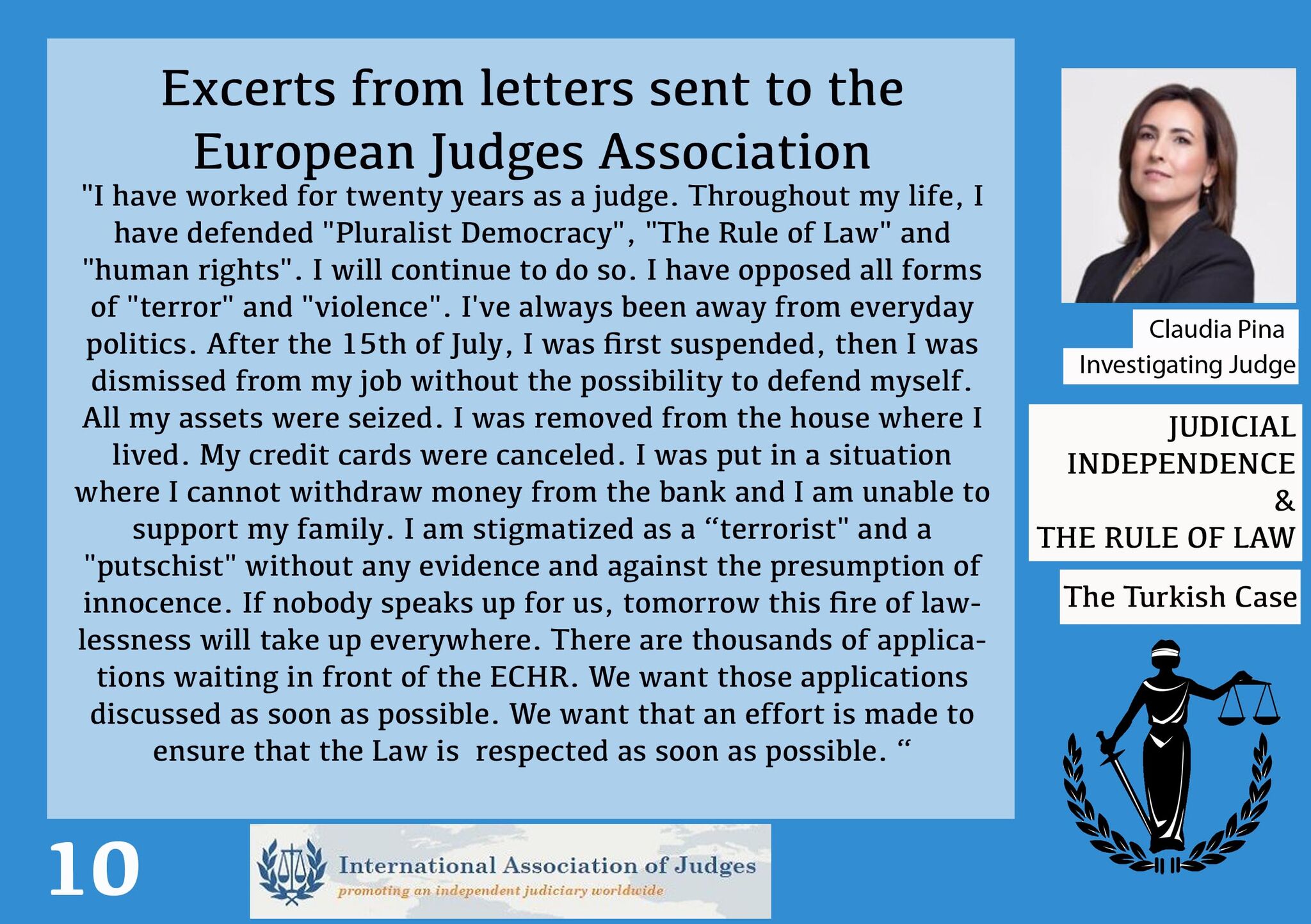 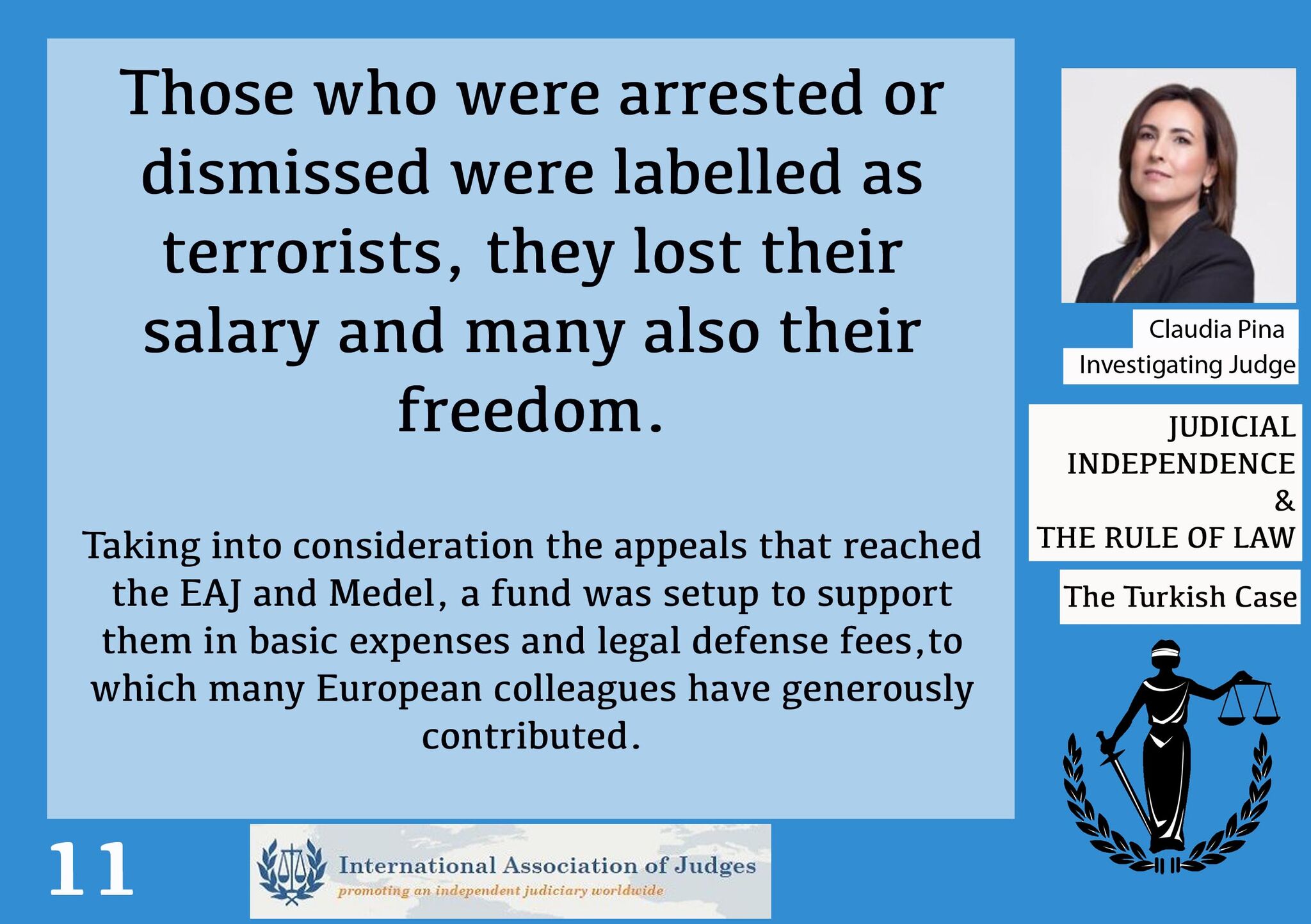 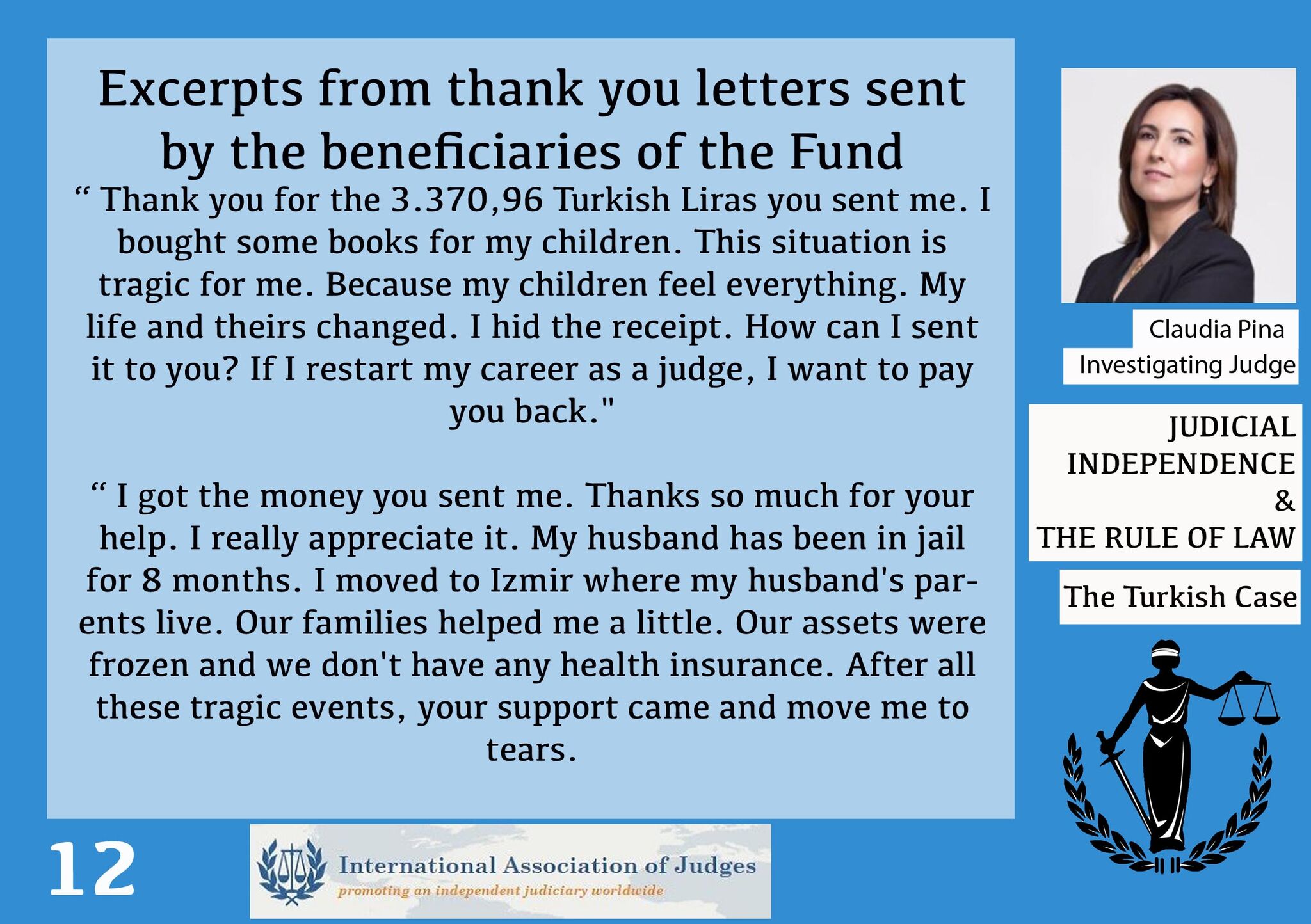 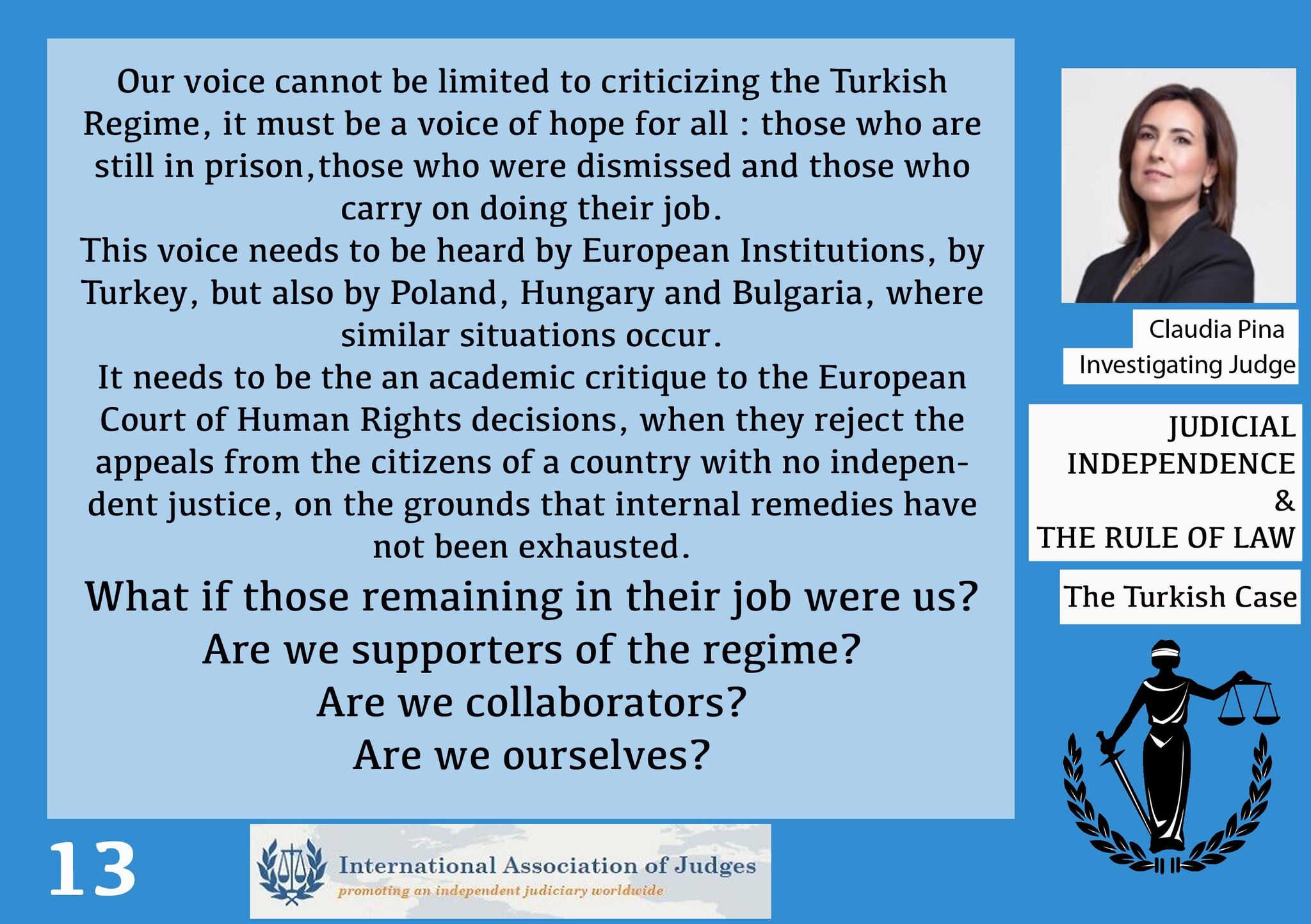