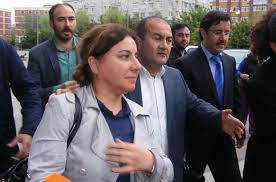 Dismissed and arrested judge Rabia Başer was sentenced to 7 years 6 months in jail by İstanbul 33th Assize Court for being member of armed terrorist organisation on 14 March 2018.

She is the wife of judge Mustafa Başer who was arrested and sentenced to 10 years in jail after deciding to release for arrested police officers investigating corruption scandal of Zarrab, Ministers’ and Erdogan’s sons.

After sentencing, court ruled continuation of arrest for Rabia Başer.