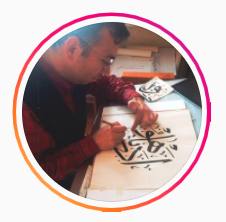 Former judge Mustafa Genç performs the art of calligraphy despite the block of prison administration.

Mustafa Genç was born in 1967. After serving as judge in different courts, he was elected to the Council of State in 2011.  He was dismissed and arrested in July 2016 following the coup attempt.

The prison administration did not allow Mr. Genç, who has been in prison for 4,5 years, to perform the art of calligraphy, which the Ministry of Justice spents hundreds of thousands Euros each year in order the prisoners to earn new skills in terms of self-improvement and education.

To be able to perform his art and to produce, he used materials such as shoe polish, pencil, watercolor, picture book, and tea that he had to buy at the prison canteen. His calligraphic artworks were shared on Instagram.