Former judge Yavuz Aydın wrote an article for Ahval English on recent amnesty bill in Turkey. Aydın highlights the ineffectiveness of the application of Main Opposition Party (CHP) before the Constitutional Court and addresses other problematic regulations in the bill.

Erdogan’s presidency enforced an amnesty bill recently but it excluded the political prisoners. The statue also gives a full authority to the Intelligence Units to take the inmates out of prison up to 14 days for interrogation. What’s worse is, Main Opposition Party CHP’s application against the new law before Constitutional Court which based on only prosecudal grounds will not help non-violent political prisoners.

Aydın tweeted also on bill that, for the fading hopes of dissidents in jail, CHP’s recent application against amnesty bill before the Constitutional Court has the risk to be the final nail in the coffin. Does the CHP really have a strategy to restore Rule of Law in Flag of Turkey? (1)

Aydın argued, by focusing on “deformity” without considering the legal consequence under Art 36/3 of tle Law on Constitutional Court, CHP made the least strategical move which might fade the hopes to of non-violent political prisoners. (2)

Here is the full article published by Ahval English:

“The Turkish parliament last week enacted the bill to release some 90,000 of the country’s 300,000 prison inmates on early parole and probation, ignoring warnings from dozens of international NGOs, the European Parliament and the Council of Europe’s Human Rights High Commissioner, that it should not exclude political prisoners.

The bill is bad news for dissidents who have been jailed under Turkey’s vaguely defined anti-terror laws that can see a person deemed a terror propagandist for criticising the government on social media.

Moreover, last-minute additions to the bill could see some of the government’s rendition and torture of detainees become backed by legislation, and the opposition’s appeal against the new laws could leave dissidents behind bars even if it is successful.

This means that 50,000 people jailed for terror offences, most of whom have nothing to do with terror or violence, have been left behind bars, while thousands convicted of organised crime, theft, fraud, corruption, violence against women, and other serious crimes walked free.

Not surprisingly, by manipulating terror accusations for political purposes, President Recep Tayyip Erdoğan has exploited the current COVID-19 pandemic to consolidate his own position, with support from his far-right coalition partners, the Nationalist Movement Party (MHP).

Among the late additions to the bill, one article inserted at 3 a.m. on the last day of discussions that raised even further criticism excluded people charged with offences against the National Intelligence Organisation (MIT) from the release programme.

So, six journalists who were arrested this year after reporting on a MIT officer killed in Libya will take their places among the thousands of dissident lawyers, judges, politicians and the 90 other journalists forced to remain in the country’s crowded prisons during the pandemic.

This was not the only radical provision inserted into the bill on the same night. As the lawyer and human rights activist Orhan Kemal Cengiz has analysed, this law now authorises MIT to remove people convicted on terror charges from prison for interrogations for up to 14 days.

It is no secret that unregistered detentions and torture in unofficial detention centres have been taking place regularly in Turkey since the 2016 coup attempt. Experts from the United Nations and international media institutions have openly criticised Erdoğan’s government for similar practices.

But thanks to this law, these practices would be effectively legalised, since the law includes no detail on the conditions or whereabouts of where interrogations take place, nor any standards to safeguard the fundamental rights of detainees under interrogation.

Another regular introduced with Article 36 of the new law will make it more difficult for terror convicts to be granted parole. This article foresees the introduction of new boards, comprising a prosecutor and two other government officials, that will have the sole authority to decide on conditional release of terror convicts after they have served at least three quarters of their sentences behind bars.

To be eligible for parole, terror convicts will now be forced to sign a petition in which they express remorse for their crimes. This would essentially force many people convicted of crimes they did not commit to confess their guilt if they wish to be released – a practice that perfectly exemplifies the government’s legalisation of illegitimacy.

What is more interesting is that these amendments, which are in breach of European Convention on Human Rights and other international standards, have been presented as “judicial reform packages”.

Indeed, instead of addressing the main problems plaguing Turkey’s judicial system, that package included provisions that aimed to retain the arbitrariness of many practices. One of the most significant setbacks in the package was regarding the duration of pre-trial detention for those accused of terror crimes. Saying nothing about shortening the total pre-trial detention period of seven years, the so-called reform legalised keeping these people in jail for two years without any indictment.

Among the amendments presented in the 2019 package as a sign of progress was one that allowed people sentenced to less than four years in prison to appeal before the high court for release. But while this led to the immediate release of three journalists, nearly 100 more remained behind bars.

Moreover, this regulation was criticised by Kerem Altıparmak, the head of the Human Rights Centre of Ankara Bar, who said it aimed to prolong the period it takes for people of Turkey to reach the European Court of Human Rights to almost ten years since applicants must exhaust all domestic remedies before applying. The chance to appeal to a high court adds another lengthy step to that process.

This is to say that the situation for Turkey’s judicial system was already grave, and the opposition faced an uphill struggle in attempting to stop last week’s amendments. Nevertheless, the legal and constitutional fight is by no means over.

Having lost the battle in parliament after a week’s struggle, the main opposition Republican People’s Party (CHP) has taken this law before the country’s highest legal body, the Constitutional Court.

As stated by CHP Deputy Engin Altay on 22 April, the annulment application is built upon Article 65 of Turkish Penal Code and Article 87 of the constitution, which suggests that the release of some 90,000 inmates is in fact, a “special amnesty” rather than an amendment on execution of sentences.

Unfortunately, building the annulment application on this argument instead of the “equality principle” under Article 10 of the constitution carries an undeniable risk which the CHP deputies in charge of making the application, being experienced lawyers by profession, you would expect to have taken into account.

Since the CHP’s argument is underpinned by the fact that an amnesty bill requires support from 360 deputies, which the ruling coalition does not have, this application may result in a total annulment of the amendment. But the risk is that, if accepted by the Constitutional Court, this would be the only tangible result, effectively consolidating the government’s policy of keeping all dissidents in jail.

This would mean there will be no legal basis for release to be extended for those left behind bars, while those already released would remain free thanks to the principle on non-retroactivity of the Constitutional Court’s decisions.

This is the scenario the Constitutional Court could well favour, since it would be unlikely to incur the government’s wrath even though it rejected the ruling coalition’s amendment.

Furthermore, the highest court of Turkey would have the chance to partly save its reputation and image of independence by taking the chance to add a new illusory decision in its track record. At the end of the day, everybody would win except the persecuted dissidents in jail. (3)” 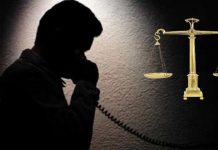 UNDER WHICH CONDITIONS COULD STATEMENTS OF CONFESSORS BE RELIED ON?