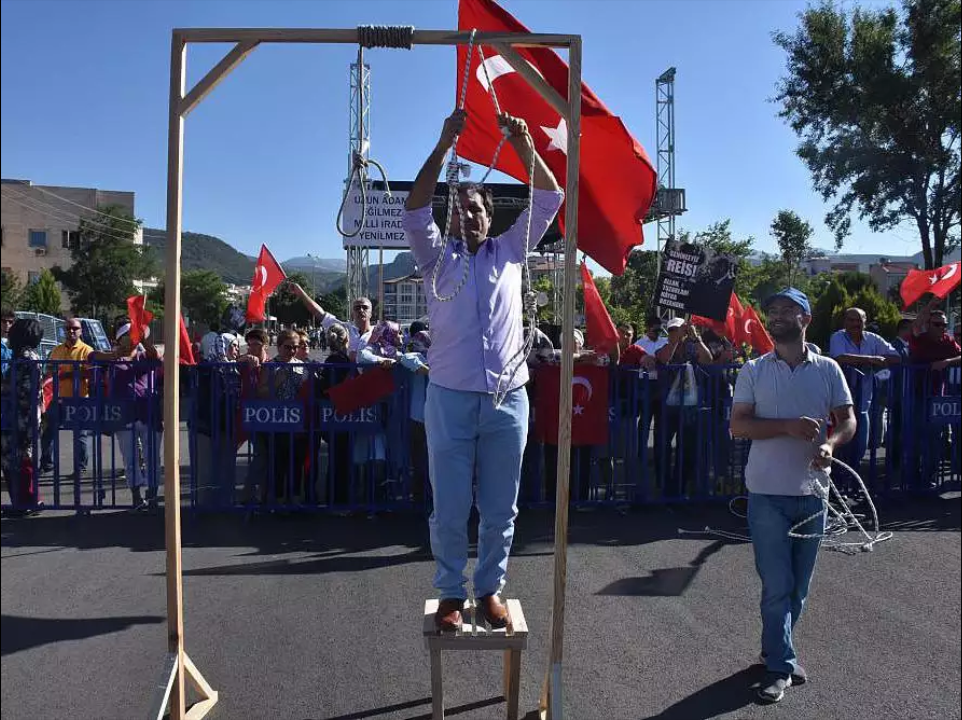 Ayse, Hatice and Dilek share the same fate. Her husbands, all judges, have been imprisoned in Turkey since the attempted coup a year ago.

If the muezzins of all 90,000 mosques in Turkey announce the so-called Sala, the announcement of death news for the victims of the failed military coup a year ago, then three women in Istanbul will hardly be able to bear the lament. Ayse, Hatice and Dilek will sadly think of July 15, 2016, which not only deeply shook the country, but destroyed their lives and that of their families. “Our husbands are not dead,” Ayse says, “but it’s as if they’ve been buried alive since the coup attempt. My children cry every time they think of their father who is innocently imprisoned. “

Eight months ago, the women contacted the FR for help. Although Turkish media write about arrested journalists, they almost never write about imprisoned judges and prosecutors because they have no lobby. This is one of the reasons why women have hesitated a long time in publicizing their fate. They are afraid if their real names were mentioned, which is why they were changed here. “We are thousands in Turkey,” says Ayse, dark hair wearing a simple, elegant dress. “We want to raise our voice for those who go through the same thing as we do. Where is justice in our country? “

The fate has brought together Ayse, Hatice and Dilek, three mothers from Istanbul between the ages of thirty and forty, who meet every week on visiting days in the maximum security prison in Silivri, west of the metropolis where their husbands are detained. Men who were respected public servants a year ago and now accused by the state of being involved in a coup attempt, for which President Recep Tayyip Erdogan blames the Fethullah terrorist organization Fetoah of Islamic preacher Fethullah Gülen. “Kafkaesk,” says Ayse. “Like a nightmare you can not wake up from.”

On the morning of July 16, while loyal troops were still battling insurgents, the High Council of High Judges (HSYK) was already issuing a list of the names of 2745 judges and prosecutors who were to be suspended or arrested for suspecting the Feto coup to belong. Versions of this list were published in the press the same day, and the police began arresting. To date, 4424 judges and prosecutors have been suspended, 2584 imprisoned, 680 are in solitary confinement. About a quarter of the judiciary was switched off.

On the morning of July 16, the Supreme High Judicial Council sent a list 2745 names of judges and prosecutors who should be suspended or arrested.

“On the published list of alleged Fetö judges, my husband and I also turned up,” says Hatice, who is carefully made up and wears a white blouse over her jeans. “That’s why we left the children with their parents and volunteered.” The Central Anatolian couple came to a completely overcrowded prison where Hatice and five other lawyers were put in a five-square-foot cell for five days. For more than 60 detainees there was only a toilet and a sink. “It felt like a joke at first. That was our Turkey? Impossible! “Hatice laughs nervously.

The next day they were presented to a very young prosecutor, who interrogated the arrested as on the assembly line. “The judge read all questions from the paper. Not a single question was about the coup, it was always about Gülen. Did I meet my husband with the Gülenists? Whether we had an account with a particular bank, visited Gülen books, or had classes with him? “Hatice recalls. “Of course we did not have that. My husband is a seasoned leftist and I am close to the nationalists. We would never have had anything in common with Gülenisten. “She says that the prosecutor shivered throughout the half-hour interrogation. “He was afraid of me and of making a mistake.” When she asked him what evidence was against her, the investigator finally admitted: “Your file is empty. There is only one letter from HSYK that you should be arrested. “

The husbands of Hatice and Dilek, two prosecutors, have been in jail for a year. Both women, even judges, were briefly detained. Ayse’s husband, who has been a criminal judge for fifteen years, was arrested in western Turkey along with a dozen other lawyers in the courthouse, she says. “They were taken to a police station where they were told that they were helpers of the putschists.” Three days later, her husband was transferred to the state prison, where he was detained for months in a room with 25 other inmates. “Today a respected judge and the next day a terrorist! How can one cope with that? “

Ayse takes the arrest warrant out of a folder. “Allegations:” Military coup against state and government and membership in an armed terrorist organization, “says there. “Evidence: Letter from the Prosecutor General’s Office in Ankara of July 16”. She laughs bitterly. “But the content of the letter is secret!” Her husband could only say that he is accused of belonging to Fetö.

Ayse’s girlfriend Hatice traces the events back to the “basic problem of today’s Turkish justice,” the massive influence of politics on the courts. Those who disobey end up in jail. The others are making a career. “In their prison, they soon talked about how to be released without trial. “You have to smear the judges with a lot of money or have friends in politics.” Hatice speaks bitterly of an abyss of bribery, denunciation and resentment. “It is the destruction of the democratic justice system, the basics of which we have studied at university. It’s all about: Are you for or against the government? If you are against it, you will be labeled as feto. “

Hatice spent a month in detention. “We were not allowed to talk to a lawyer, make phone calls, have no contact at all. It’s all illegal. “Then she was released so she could take care of her children. Neither she nor her husband have received any indictment so far. For lack of evidence, prosecutors have been trying for some time to persuade arrested lawyers to make denunciations.

In fact, HSYK leader Mehmet Yilmaz pledged to impeach impunity and return to legal confessional statements. But when the pro-government media outraged him, he rowed back. “I said so that people confess and we get concrete evidence,” he said in an interview. “Of course, they can not go back to their jobs.” For the three women, it is evidence that the investigators do not have the slightest evidence against them.

“The judiciary has become completely arbitrary,” says Hatice. Unlike her, Dilek, who also exudes the assurance of an experienced judge, has just received her indictment with the threat of 15 years imprisonment. On her computer she opens the file, which contains almost 100 pages. “What’s in it, could have written a secretary of the court,” she scolds. Only a tenth of the text deals with her. She is accused of using the Internet messenger service Bylock, which is associated with Fetö. “I first heard from Bylock a month after the coup attempt. But we had to hand in all our cell phones, of course they could have played the program. “

The remaining 90 percent of the charges deal with the transport of weapons by the Turkish intelligence service MIT to Syrian rebels and corruption investigations against the government instigated by Fetö. “Is that my business? Nothing! “Says Dilek. “We noticed that many colleagues got exactly the same font, only the names were exchanged.”

Even Dilek was after her arrest only a few days in police custody. But her husband has been in solitary confinement for months. “His detention conditions are awful. He is allowed once a day in a small courtyard with ten-meter-high walls, which is covered with a steel plate, so that he never sees the sky. “He was also reproached for being” clearly wrong, “says Dilek.

Dilek, Hatice and Ayse believe that the real reason for the arrest warrants has to do with their commitment to the Liberal Judge Association Yarsav. “The point is that we and our husbands did not vote for the Erdogan list YBP in 2014 in the election to High Judicial Council HSYK,” says Dilek. “They want to totally cleanse the judiciary of Erdogan opponents.”

Therefore, already three months before the attempted coup in Erdogan-close Judge Association circulated a list of names with Yarsav members. The irony is that the internationally recognized, pro-European Yarsav Association was founded 11 years ago by judges and prosecutors with the aim of defending the independence of the judiciary against Gülenist infiltration. In Dilek’s indictment it says now, Fetö would have tried to infiltrate the now by decree closed Yarsav club and bring under his control.

The government strongly rejects the allegations raised by human rights organizations such as Human Rights Watch and Amnesty International. The measures were directed only against terrorist suspects, said Justice Minister Bekir Bozdag. However, Ankara Bar Association President Deniz Özbilgin also confirms: “We believe that the main purpose of the arrests is to bring judges and prosecutors into line.” Özbilgin also confirms that the accused state lawyers have enormous difficulties, defenders to find. “No one wants to represent them, so as not to be seen as sympathizers of terrorists.”

Ayse reports that her husband, who wanted to defend himself, still has no insight into his file. Lawsuits would be denied him, his submissions to the European Court of Human Rights not forwarded. “All this is unlawful, but since the July 20, 2016 imposed state of emergency – as well as the restriction of prisoners’ rights. While serious criminals may receive 45 minutes of visits three times a week, their husbands are allowed only one weekly visit and one phone call every two weeks, say the three women. All men lost much of their time in detention. Ayee’s husband became depressed. He was dismissed from the civil service eight months ago. His account is blocked as well as the disposal of other possessions.

“We only survive thanks to my parents who support us,” says his wife. In the meantime, her husband is doing better. “But he is very worried, especially about the children.” In the months after the coup attempt, they often came crying from school because their father was called the “enemy of Turkey”. For weeks there was no topic in the classroom other than the coup d’état. “They did not want to go to school at all. And now for the Anniversary, it all starts again. “

Hatice says her husband regained his old fighting spirit after a period of discouragement. Dilek, Hatice and Ayse have networked in a Facebook group with 450 other women judges and know that many still significantly worse. Hatice is like Dilek occupied with a professional ban. Your passports are invalid. They are not allowed to work or own anything, but they are not allowed to go either way.

The women were pleased with the recently ended march for justice of the opposition leader Kemal Kilicdaroglu, which was followed by millions of people. They did not participate because they believe that it is important to remain impartial as a judge and not to belong to any party. “There is no more legal security in our country,” says Dilek. “But the law will come back. In the long run injustice can not win. “

Original link of the news:

Being purged from his job as a judge after the 15 July coup attempt, Eyüp Sarı is doing farming

The tombstone of former woman judge Gülsüm Coşar, who died in exile at the...

Mahmut Kış, former member of the Court of Cassation, who was dismissed and arrested...

Purge-victim woman judge Gülsüm COŞAR died of heart-related causes at the age of 31...