Nahit Emre Güney, a 26-year-old university student, died on Wednesday (12. October 2022) after he jumped from the observation deck of Galata Tower, an İstanbul tourist destination, due to depression caused by the imprisonment of his father, former high judge,  in a post-coup purge.

Emre, who was studying law at İstanbul University, was the son of Haşim Güney, a former member of the Council of State who was imprisoned in July 2016 after a failed coup took place in Turkey. Emre began to receive psychological treatment following the arrest of his father.

Haşim Güney was sentenced to 10 years in prison over the pretext of terrorism. He has been in prison for the past six years. 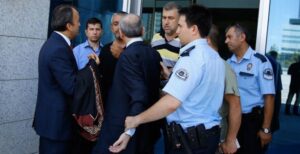 Haşim Güney (at left) was arrested with his colleagues a day after coup attempt on 16th July 2016 in front of Council of State (Supreme Adminisrative Court).

Student jumps to his death from Galata Tower over father’s imprisonment https://t.co/0yj7BCIRrQ