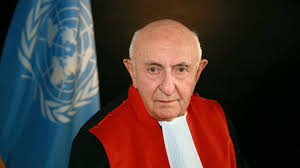 Yesterday the UN Secretary-General reappointed 23 of the 24 Judges of the International Residual Mechanism for Criminal Tribunals. The one judge not reappointed was Judge Aydin Sefa Akay of Turkey, who is one of hundreds of Turkish judges purged by the Erdogan regime, which accused him of being a member of a terrorist organization. This is not only a manifest act of political cowardice on the part of the Sec-Gen, but is a direct assault on the independence and integrity of the international judiciary. Below is a powerful statement in that regard of MICT President Theodor Meron, who deserves much credit for standing up for his colleague and for basic principles.

On 29 June 2018, the UN Secretary-General reappointed for a new, two-year term of office all of the Judges on the roster of the International Residual Mechanism for Criminal Tribunals (Mechanism) who were seeking reappointment except Judge Aydin Sefa Akay of Turkey. In response to this development, the President of the Mechanism, Judge Theodor Meron, expressed his “deep regret regarding, and respectful disagreement with, the decision not to reappoint my valued and esteemed colleague, Judge Akay, and my grave concerns about the far-reaching consequences this decision will have for our institution and for international criminal justice more generally”.

The arrest of Judge Akay, his detention and the legal proceedings against him are inconsistent with the assertion of his diplomatic immunity by the United Nations in October 2016, as well as the binding judicial order by the Mechanism to the Government of Turkey issued in January 2017. President Meron formally brought the matter to the attention of the UN Security Council in March 2017 and on other occasions, as well as reporting the matter to the UN General Assembly. At present, the Turkish judgment of first instance against Judge Akay is subject to an on-going appeal as well as potential review proceedings at national and international levels and the verdict has yet to acquire legal finality.

President Meron observed that “the decision not to reappoint Judge Akay is profoundly troubling on multiple levels”. Expressing concern about the impact of this decision on Judge Akay personally, the President also noted that “the situation has raised serious questions as to whether the immunities to which Judges are entitled and the judicial independence that these immunities serve to protect can be effectively guaranteed for institutions such as the Mechanism, where Judges typically work in the countries of their nationality.”

It is understood that the decision not to reappoint Judge Akay was based on information provided by the Government of Turkey to the UN Secretariat that Judge Akay no longer satisfies the qualifications for Judges identified in Article 9 of the Mechanism’s Statute by virtue of his conviction. The President expressed strong disappointment in this regard, stating that “the acquiescence to the position advanced by the Government of Turkey represents a defactoacceptance of a State’s actions undertaken in contravention of the diplomatic immunity asserted by the United Nations, a dangerous precedent to set.”

President Meron further underscored that the potential for political or other inappropriate pressure by a government in these circumstances is unlimited, explaining “there is a great difference between the statutory right of States to nominate their nationals for election and the far more indeterminate and potentially political and arbitrary possibilities of an extra-statutory and still vague procedure that allows States to advocate the removal or non-renewal of their national Judges or even, potentially, Judges of any nationality”. He added: “If States are permitted to take action against a Judge in violation of the applicable international legal framework, judicial independence—a cornerstone principle of the rule of law—and the integrity of our court as such are fundamentally at risk, as is the overall project of international criminal justice.”

*Dr Marko Milanovic is Associate Professor at the University of Nottingham School of Law.

UN Secretary-General Refuses to Reappoint Turkish Judge on the MICT